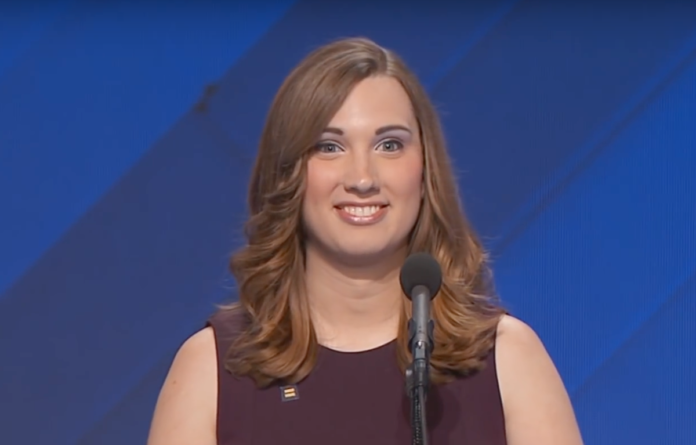 Even in the oppressive climate of a Trump-Pence administration, progress continues. In Delaware, a woman who became the first openly transgender person to address the Democratic National convention in 2016, is now running for the Delaware State Senate. If she wins the 2020 race, activist Sarah McBride (D) will become the first elected transgender senator in the state.

“I’ve spent my life standing up so that people can have dignity, peace of mind, and a fair shot at staying afloat and getting ahead,” McBride said in her campaign announcement.

Sarah McBride was one of the first openly transgender people to work at the White House, starting at the Office of Public Engagement in August 2012. Just months earlier, she came out as a college senior while she served as student body president at American University.

“At the time, I was scared. I worried that my dreams and my identity were mutually exclusive,” McBride said at the DNC. “Since then, though, I’ve seen that change is possible.”

Her experience in politics is considerable, having worked for former governor Jack Markell and the late attorney general Beau Biden, son to the presidential candidate frontrunner. As national press secretary for the Human Rights Campaign, McBride has helped advance LGBTQ rights, even as President Trump has worked against rights for just about all minorities. She has called his administration “one of the most explicitly anti-LGBTQ administrations in history.”

The new senate candidate’s legislative accomplishments include lobbying for Delaware’s Gender Identity Nondiscrimination Act, which she saw signed into law in 2013. She has raised awareness, authoring the book: Tomorrow Will Be Different: Love, Loss, and the Fight for Trans Equality.

Although she happens to be a minority, her campaign doesn’t revolve around minority issues but around the concerns that all Americans face, focusing on affordable health care. The issue is deeply personal for her.

When her husband, transgender fellow activist Andy died of cancer in 2014, she learned first-hand about the pitfalls of America’s current health care system as she provided care for him.

“Andy and I married in 2014, and just four days after our wedding, he passed away. Knowing Andy left me profoundly changed, but more than anything else, his passing taught me that every day matters when it comes to building a world where every person can live their life to the fullest,” said McBride.

She recognizes that our current system isn’t working even for those who have “good” insurance coverage.

“Even for people with good health insurance and good care healthcare is the biggest quality of life issue in most of our lives,” said McBride.

McBride will also focus on expanding paid leave for the workforce and improving the criminal justice system.

McBride decided to run for Senate after Senator Harris McDowell announced his retirement after serving Delaware for an astonishing 42 years.

See her speech at the DNC below: