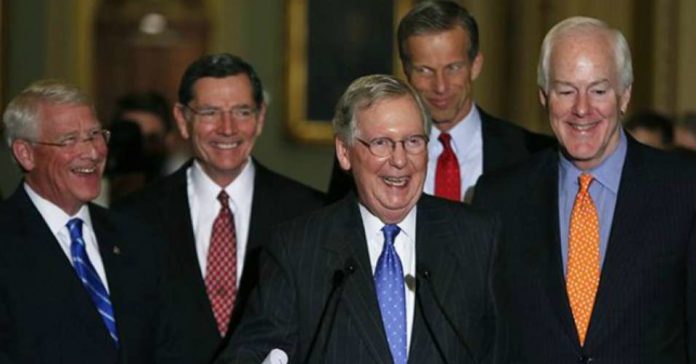 21 Republican senators, led by Ted Cruz (TX), wrote a letter they sent to Treasury Secretary Steven Mnuchin calling for yet another massive tax giveaway to the richest Americans, according to Common Dreams:

In a letter (pdf) led by Sen. Ted Cruz (R-Texas), the GOP senators called on Treasury Secretary Steven Mnuchin to index capital gains to inflation, a move that would primarily reward rich investors.

According to Bloomberg, the Trump White House is “developing a plan” to cut taxes for the rich by indexing capital gains to inflation.

“Indexing capital gains would slash tax bills for investors when selling assets such as stock or real estate by adjusting the original purchase price so no tax is paid on appreciation tied to inflation,” Bloomberg reported last month.

The problem with such a plan, however, is that it may not even be legal. Former President George H. W. Bush toyed with the idea, but was told by the Treasury Department that the move “would be illegal.”

All of this comes right as Trump is gearing up for the 2020 election by repeatedly trashing people of color and cities such as Baltimore that are majority African-American. Coincidence? It hardly seems so.

A move to cut taxes for the rich yet again is also in stark contrast to announcements made recently by the administration to slash programs such as food stamps and school lunches. Both of those benefit the neediest and most vulnerable Americans such as children and the elderly.

There’s also the total cost of such a tax cut, which could well add $200 billion to the deficit:

Democrats in the Senate, however, have also written Secretary Mnuchin:

The letter was signed by Sens. Ron Wyden (D-Ore.), Jeff Merkley (D-Ore.), Bernie Sanders (I-Vt.), and a dozen other senators.

“We remain concerned this administration’s relentless preoccupation with cutting taxes for our country’s wealthiest taxpayers while leaving behind middle class families and working people,” wrote the senators, “even to the extent that it would consider exceeding its legal authority to do so.”

But for a president who doesn’t think the law applies to him, a tax cut that isn’t approved by Congress seems like exactly the sort of thing he’ll do in order to keep his wealthy friends and contributors fat and happy.