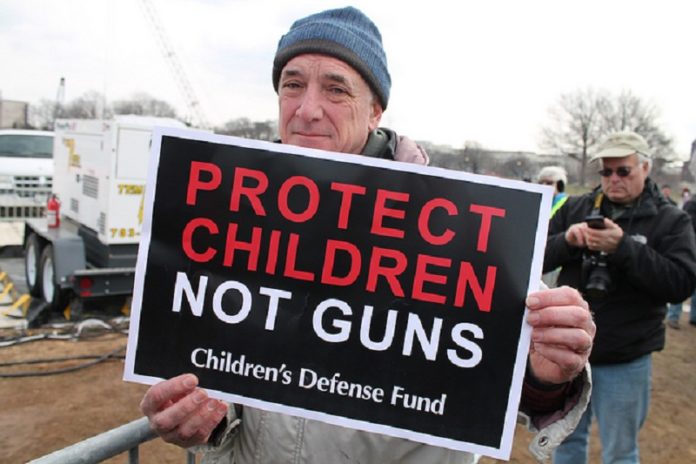 In retrospect Sandy Hook marked the end of the US gun control debate. Once America decided killing children was bearable, it was over.

Was Sandy Hook really the end of the debate? Or is America going to wake up to the fact that they have a serious gun control problem?

Because the National Rifle Association (NRA) pays off our legislature and touts 2nd Amendment rights, this country experiences mass shootings at a higher rate than any other country on the planet.

The United States’ Congressional Research Service acknowledges that there is not a broadly accepted definition, and defines a “public mass shooting” as one in which four or more people selected indiscriminately, not including the perpetrator, are killed, echoing the FBI definition of the term “mass murder”.

Is American society more violent than other societies? Have our racial divides caused such strife that the only answer is gun violence? Is it because of our inadequate health care and a failing mental health system?

Each one of the common reasons given by state and U.S. legislators (the ones owned by the NRA) have been debunked time and time again. Research data is readily available to back up the disposal of each question posed above. That only leaves one answer — and it is the answer that the NRA and 2nd Amendment advocates are denying.

The number of guns owned by American citizens and the ease in obtaining firearms is the root of America’s mass shooting problem.

While making up only 4.4 percent of the world population, Americans own 42 percent of all guns. Adam Lankford’s study at the University of Alabama, chronicling shootings between 1966 and 2015 revealed that a full 31 percent of worldwide mass shootings were conducted by Americans.

In countries with more than 10 million people, after adjusting for population, Yemen is the ONLY one that has a higher rate of mass shootings than the U.S. and they are second in the rate of gun ownership.

The overall conclusion of Lankford’s study was that:

a country’s rate of gun ownership correlated with the odds it would experience a mass shooting. This relationship held even when he excluded the United States, indicating that it could not be explained by some other factor particular to his home country. And it held when he controlled for homicide rates, suggesting that mass shootings were better explained by a society’s access to guns than by its baseline level of violence.

But… what about mental health? Aren’t the people shooting up the country all sick in the head? In truth, only a scant 4 percent of gun deaths in this country can be attributed to mental health issues according to a 2015 study of the matter. In the Lankford study, it was discovered that “countries with high suicide rates tended to have low rates of mass shootings.” The extraordinary number of gun deaths due to mass shootings in America is not because of mental health issues.

The results of studies into racial disparity yielded similar results. Our melting pot societal make-up does not seem to lend itself to the increased level of gun violence in America.

America isn’t particularly more prone to crime than other nations – our crime is simply more violent, and downright deadly. In the event of a simple robbery, an average New Yorker is 54 times more likely to die as a result of the crime than the average resident of London. The difference always returns to the number of guns. From The New York Times:

More gun ownership corresponds with more gun murders across virtually every axis: among developed countries, among American states, among American towns and cities and when controlling for crime rates. And gun control legislation tends to reduce gun murders, according to a recent analysis of 130 studies from 10 countries.

This suggests that the guns themselves cause the violence.

Skeptics will grab any information that points to guns NOT being the problem. In a direct comparison in a study from 2016, attacks occurring between 2000 and 2014 were studied and found that “the United States death rate by mass shooting was 1.5 per one million people. The rate was 1.7 in Switzerland and 3.4 in Finland.” That would seem to suggest that mass shootings in this country weren’t really out of the ordinary — until you consider that there were 133 mass shootings here, but only two in Finland and one in Switzerland.

Gun deaths and mass shootings are not “commonplace” anywhere in the world — except here in America.

In 2013, American gun-related deaths included 21,175 suicides, 11,208 homicides and 505 deaths caused by an accidental discharge. That same year in Japan, a country with one-third America’s population, guns were involved in only 13 deaths.

Why? Gun control regulations in the U.S. are among the weakest in the world. And that has brought us full circle, right back to the fact that the sheer number of firearms in American is directly responsible for the number of violent deaths attributed to guns.

Where do we go from here? To many, the answer is simple. Enact sensible gun regulations to limit the number of guns and the type of guns available. But how do you convince Americans?

The weight of life. It would seem that there may be some truth to the statement made by Dan Hodges about the Sandy Hook tragedy. America seems to have decided that killing children is a bearable weight. Until that cultural normalcy is changed, we will be destined to watch our children get mowed down in the streets. We will cry. We will send thoughts and prayers to the families of the victims. We will continue down this path of violence.

Until we, as a nation, decide that the weight of a child’s life is not worth the cost of unregulated gun ownership.

Featured image from Elvert Barnes on Flickr under CC BY-SA 2.0