The United States Blues
Home National News Hannity claims Trump still ‘holds all the cards’ after not getting a... 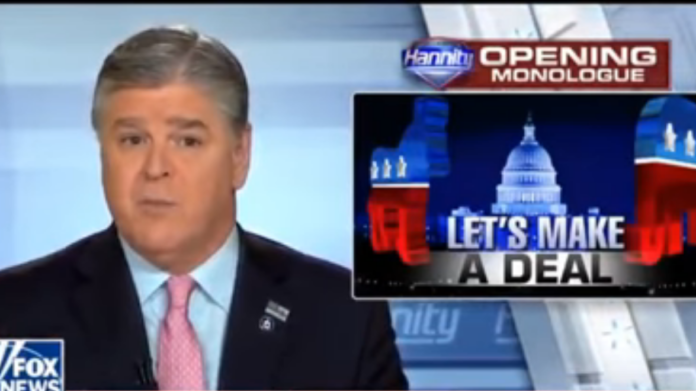 According to Fox News host Sean Hannity, President Donald Trump still “holds all the cards” even though he lost in a government shutdown standoff with House Speaker Nancy Pelosi (D-CA), who got everything she wanted while the president got zero in the way of funding for his long-promised border wall.

Many conservative commentators excoriated Trump when it was announced he would be ending the shutdown and opening the government for three weeks. Ann Coulter even called Trump a “wimp” on Twitter:

Good news for George Herbert Walker Bush: As of today, he is no longer the biggest wimp ever to serve as President of the United States.

A new hashtag is also trending on social media this morning: #TrumpCaved.

But Hannity, who never passes on an opportunity to slavishly prostate himself before his tangerine savior, said on his show Friday evening that Trump was doing his best to procure billions of taxpayer dollars for his vanity project:

“The president, to his credit, he has tried every single thing he could possibly do. He has been reasonable, he has been fair, he has offered concessions, but in the end it’s his job as Commander-in-Chief to keep us safe. He’ll do his job. So now, Congress, they have their three weeks to do their job and secure our border.”

Thing is, the border is already secure. Border crossings are way down, and Trump has even praised border patrol agents not allowing any members of the caravan of Central American immigrants to cross into the United States several weeks back:

Mexico is doing NOTHING to stop the Caravan which is now fully formed and heading to the United States. We stopped the last two – many are still in Mexico but can’t get through our Wall, but it takes a lot of Border Agents if there is no Wall. Not easy!

The key phrase in that tweet is clearly “We stopped the last two.” If they were stopped, then why is a wall needed?

Hannity then did one hell of a spin job, asserting that Trump, who just got his head handed to him by Congressional Democrats, is in a position of strength:

“And anyone out there, by the way, thinking President Trump caved today, you don’t really know the Donald Trump I know. He, right now, holds all the cards.”

Poor Sean! He’s got his nose stuck so far up Trump’s posterior that he can’t even read the writing on the imaginary wall his failed leader wants to build.