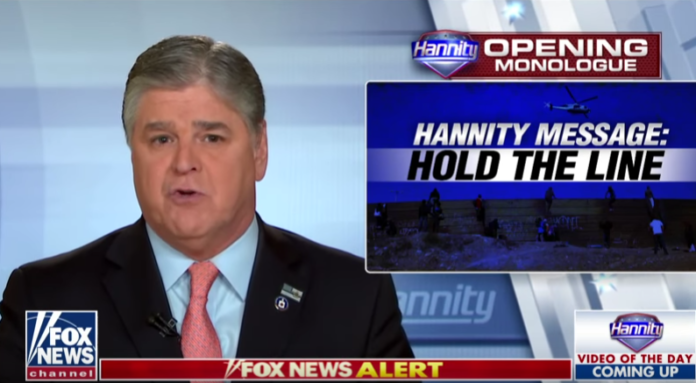 Fox News propagandist Sean Hannity fired off a warning to Republicans during his opening monologue on Friday night demanding they continue supporting President Donald Trump’s government shutdown or else.

Trump’s desperation to get his vanity project built along the southern border reached a new low this week when he threatened to declare a national emergency to unilaterally fund and build the wall without having to get congressional approval, a move that would likely be challenged in court since there’s no real border security emergency.

But as the government shutdown enters it’s third week, Hannity made sure to warn skittish Republicans that they better hold the line or suffer a backlash from their right-wing base.

“My message to the Republican Party tonight is this is important,” Trump’s favorite propagandist began.

Hannity repeated Trump’s repeatedly debunked claims that a wall would stop human trafficking and drug smuggling before moving on to warn the GOP not to cross Trump’s base:

“The President’s base is now deeply invested in this shutdown, the President has taken a stand and it’s time for the Republicans to do the same,” he said. “How many more innocent Americans, think about this, would need to die before Democrats…will protect the border?”

“Many on the left, including nearly everyone on every other network––because of course, it’s the hate-Trump media––they seem to want a weaker country, filled with lofty, surreal, progressive principles, and they’re not looking out for the safety of you and your family,” he continued.

This is slander using misinformation. Undocumented immigrants commit crime at a much lower rate than natural born citizens and a wall would not stop illegal immigration as migrants would still enter the country by boat or plane. Walls can also be tunneled under or climbed over. It’s an impractical and expensive solution. Hannity’s accusations are also hypocritical since far more Americans have been murdered by other Americans with guns than have been murdered by illegal immigrants, most of whom originally entered the country through a legal port of entry and overstayed their visas.

But while Hannity is demanding a wall to stop a few murders, he has refused to support every practical solution offered to prevent mass shootings, favoring “thoughts and prayers” instead.

He then concluded with a final message for Republicans:

“No matter what the President does, he must hold firm on this border wall funding from Congress. There must be no amnesty under any circumstances. Lindsay Graham––he has made a proposed compromise that would give DACA recipients three years of a work permit that they might be able to renew down the line. If there’s no amnesty, and money for the border wall to protect the American people, then they will have accomplished something very important. And, by the way, they’ll politically benefit for it, but that shouldn’t be the reason they do it. If they capitulate––the Republicans––the political damage frankly is incalculable, and it will hound a lot of these people, you know, throughout the rest of the Trump presidency. Also, it will have an impact on the 2020 race. The point now is stay the course, don’t back down.”

What Republicans need to understand is that it’s not their base that actually gets them elected, but the moderate and independent voters, most of whom oppose the wall and blame Trump for the shutdown.

But they are so beholden to their shrinking base that they are apparently incapable of going against them. The only way to grow the Republican tent is to appeal to a wider range of voters, but that won’t happen if Republicans continue to obsessively pander to a base that is getting older and smaller every day.

Listening to Hannity not only continues to hurt the nation, it’s political suicide. The majority of Americans oppose the wall and blame Trump for the shutdown. It’s time for Republicans to act like responsible adults and pass the House bill approved by Democrats. It’s the same bill Senate Republicans unanimously passed last month before Trump decided to hold everyone hostage, and it’s the same bill they should pass now by a veto-proof margin. The shutdown will end. Trump will not get his wall. And the nation can breathe a sigh of relief and give credit to Republicans for finally standing up to the bully-in-chief.