The United States Blues
Home Economics Harvard economist warns a financial crisis is on our doorstep and Trump... 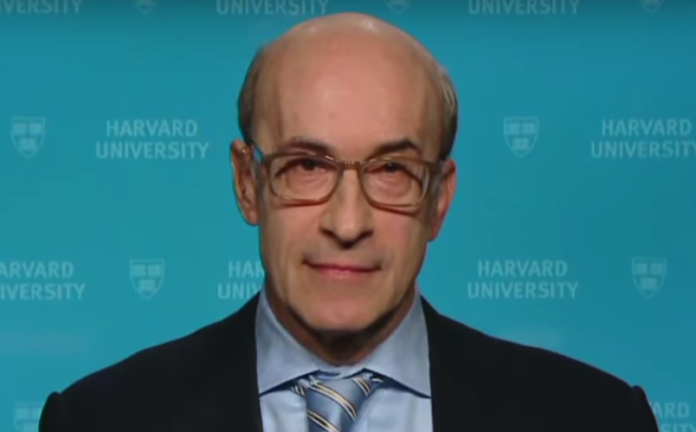 President Donald Trump may have declared the state of the union “strong” on Tuesday night, but Harvard economist Ken Rogoff begs to differ.

The good news is that the economy still appears relatively strong thanks to reforms and policies put in place by former President Barack Obama, who still deserves credit for the low unemployment rate, strong jobs growth, and big stock market gains that began under his watch.

The bad news is that Trump has been working hard to undermine all of that success even as he brags about it.

After all, multiple trade wars, wasteful tax cuts for the wealthy, slashing crucial regulations and the government shutdown have all contributed to growing concern on Wall Street and Main Street that a worse recession than the one in 2008 is approaching. Trump’s attacks on the Federal Reserve have not helped matters either and neither has the ballooning deficit and debt.

The government shutdown alone wiped out nearly half a point of economic growth. Farmers have been shut out of the Chinese markets. American manufacturers are increasingly forced to move production overseas. And the stock market had the worst December performance since the Great Depression.

Of course, the government under Obama handled the 2008 recession with great skill, helping the economy roar back over a six-year period that continues today. The question is how long will that last before Trump’s disastrous policies make the house of cards fall?

But Rogoff isn’t concerned about when or how a recession occurs as much as he’s worried about what the government will do about it this time around.

Because Trump and his team have been so incompetent and many of his top economic advisers have left the administration, it’s likely White House officials will run around like chickens with their heads cut off once the economy starts to go to hell in a handbasket.

“Can anyone honestly say that US President Donald Trump’s administration has the skill and experience to deal with a major collapse?” he asked in a column for The Financial News. “It is hard to know, because the only real crisis the United States has experienced so far during Trump’s presidency is, well, Trump’s presidency.”

US Federal Reserve chair Jay Powell and his team are first-rate, but who will be the other adults in the room if an externally generated financial crisis threatens? The Fed cannot begin to do everything on its own; it needs both political and financial support from the rest of the government.

Rogoff pointed out that as financial institutions continue to grow and critical regulations continue to be rolled back by the administration, it becomes more likely that the irresponsibility that caused the 2008 economic crisis will return and cause a new one. Congress could do something, but Senate Republicans would likely reject any solutions House Democrats put forward to fix the problems much as they did when they obstructed jobs and infrastructure bills during Obama’s first term that would have helped the economy grow even stronger. They certainly won’t fight to end Trump’s trade wars or repeal the tax cuts they passed for the wealthy and corporations. The GOP has been all about protecting Trump’s actions, even if they are detrimental to the nation. They have no problem watching the nation burn while Democrats work helplessly to fix it.

“Unfortunately, an inexorably growing financial system, combined with an increasingly toxic political environment, means that the next major financial crisis may come sooner than you think,” Rogoff concluded.

So, without Trump’s meddling, we could have expected the economy to keep going strong for many more years without a major recession. But the chaos Trump is causing combined with his fiscal and trade policies could result in a recession a lot sooner, especially if an outside crisis occurs, which is likely because of Trump’s clumsy dangerous foreign policy. Trump is an incompetent executive who makes multiple unforced errors and if people think he’s helping the economy, they need to think again before it costs them everything.