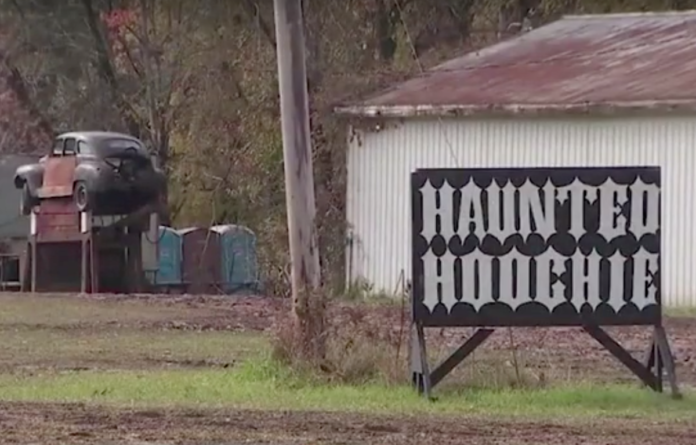 Employees and the owners of a Haunted House venue in Pataskala, Ohio held an annual “Swastika Saturday” on the same day that a gunman opened fire at a Jewish synagogue in Pittsburgh. The Haunted Hoochie bills itself as “The world’s most extreme haunted house,” and this time extreme also meant anti-Semitic.

On the website, the Haunted Hoochie prides itself on:

“Working Hard To Make You Sick”

A performer admitted to poor timing and noted that the venue values “free speech.”

He added that he regarded the performances as expressions of free speech.

“We kind of see the Haunted Hoochie as one of the last bastions of true free speech,” said Schiff.

He claimed that the extreme performances and costumes were meant as a joke and that many of the performers, including himself, had no idea about the Pittsburgh shooting until later that night.

“It’s more of a joke and in retrospect, a joke that was timed poorly, ” said performer, Alex Schiff.

Responding to a rumor that guests could get into the Haunted House for free for wearing a Swastika, Schiff said:

“It wasn’t a hate rally. You can’t get in free for wearing a swastika. I don’t know who started that rumor. It’s really more of an inside joke for the people who work there,” adds Schiff.

So apparently, we can all rest easy because the Swastikas are an “inside joke.”

Another employee expressed disgust that people were trying to shut down the venue.

“For people to hear about this and to never have been in our haunt and try to shut us down just because of hearsay,” says Ashley Shiflet.

The Haunted Hoochie prides itself on “letting loose” on the last Saturday of the attraction.

“Everybody lets loose. You see overweight men in mankinis running around, and tutus. it’s basically just to make us laugh,” Schiff said.

“Please let us make one thing clear and apologize right now for any insensitivity on our part. We show you the darkest, sickest, depraved parts of the world we all live in. We definitely aren’t Nazis. Its a haunted house, its all about the horrors we face here on earth. We also don’t condone murder, torture, suicide by shotgun, or birth by sledgehammer. We are here to shock and awe and terrify. It does make us sad that this country is being divided against and killing each other. Don’t fall for the illusion that one race/ religion is better than another. Peace, love, and light”

In a separate post, the Haunted Hoochie page stated:

“On behalf of the entire Haunted Hoochie staff, we first and foremost extend our sincerest condolences to the families affected by the tragedy in Pittsburgh, and the Jewish communities of the area.”

“Second, we will in no way tolerate any form of hatred on our grounds, from our staff, or from our guests. This means that certain costumes or themes may be deemed inappropriate and you will be denied admission or asked to leave the grounds.”

They pledged to make a donation to the Jewish synagogue that was the scene of the mass shooting.

“We are working with community leaders to mend fences, and pledge our support to the victims with a fifty thousand dollar donation to the tree of life synagogue.”