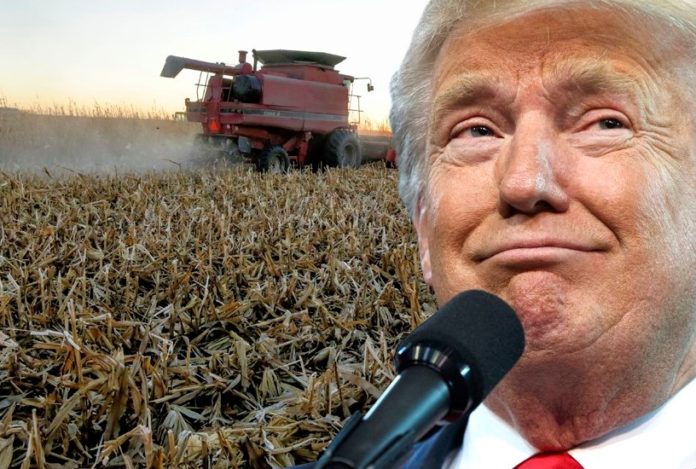 On a day when President Donald Trump’s trade war with China once again sent the stock market into freefall, the president of the National Farmers Union, Roger Johnson, made it clear that American farmers are sick and tired of the damage Trump is doing to the national economy and their lives.

In an official statement he issued, Johnson began by noting that the president’s tit for tat trade battle seems pointless:

“It’s no surprise that China is slapping even more tariffs on American products. Every time Trump escalates his trade war, China calls his bluff — and why would we expect any differently this time around?”

Johnson then let Trump know that farmers are the ones paying the biggest price for his tough guy rhetoric and actions against China:

“And it’s no surprise that farmers are again the target. In just the past three years, US soybean exports to China have fallen nearly 80 percent, and once these tariffs kick in, things are likely to get worse.”

But Johnson was far from done letting Trump and the country know that the people who put food on their tables are in bad shape, and things are getting worse by the day:

“Farmers are making half of what they were in 2013, and they’ve taken on record levels of debt just to keep their doors open. Chronic overproduction continues to push commodity prices down, and extreme weather events and higher temperatures caused by climate change have made the job of growing food just that much more challenging.”

The statement concludes with a reminder that Donald Trump may think his trade war is accomplishing something, but most farmers don’t see it that way:

“But instead of looking to solve existing problems in our agricultural sector, this administration has just created new ones. Between burning bridges with all of our biggest trading partners and undermining our domestic biofuels industry, President Trump is making things worse, not better.”

The incumbent president may say he loves farmers, but his actions suggest otherwise. And now some of those farmers are letting him know that he’s destroying their livelihood with his posturing.