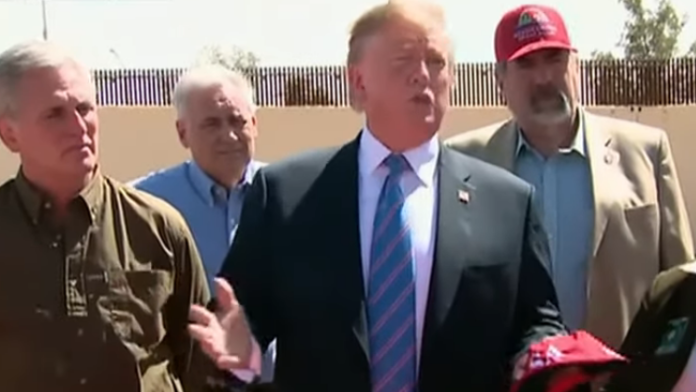 Visiting the U.S.-Mexico border in Calexico, California, Friday afternoon, President Donald Trump said he wanted all those seeking asylum in the United States to know that they aren’t wanted and won’t be accepted.

Speaking at a border patrol station, the president participated in a round table discussion on border security. As you might expect, he did most of the talking, declaring:

“People want to come in and they shouldn’t be. Gang members and lots of others. We’re getting them out.”

On several occasions, Trump also reiterated that the situation on the border is a “national emergency” as he declared in February via executive order. That order is now being challenged in court by at least 20 U.S. states.

But it was what the president said later in the day that suggested the utter disregard Trump has for those seeking a better life in the U.S. for themselves and their families, telling asylum seekers:

As HuffPost reports, Trump then turned to outright lies to try and make his case for a border wall:

“The president decried the ‘drugs, human trafficking’ coming through the border, falsely stating these ‘come in the areas of the border where you don’t have the wall.’

“’They don’t come through the ports of entry,’ he said ― a statement that is not borne out by fact.

“The vast majority of illegal drugs seized at the border last year was at legal crossing points, according to Customs and Border Protection statistics ― including about 90 percent of heroin, 88 percent of cocaine, 87 percent of methamphetamine and 80 percent of fentanyl seized in 2018.”

While he was in California, Trump also paid a visit to a section of existing steel fencing that is in the process of being rebuilt. But Trump chose to refer to this portion of the barrier as “the new wall,” as if it had been built on his order. In reality, the barrier repairs were authorized during the Obama administration.

Trump’s wall and the funding he’s trying to divert to pay for it will likely be tied up in court for years, meaning that one of his main 2016 campaign promises won’t be fulfilled as he seeks re-election in 2020 with historically low approval ratings and a slowing economy.