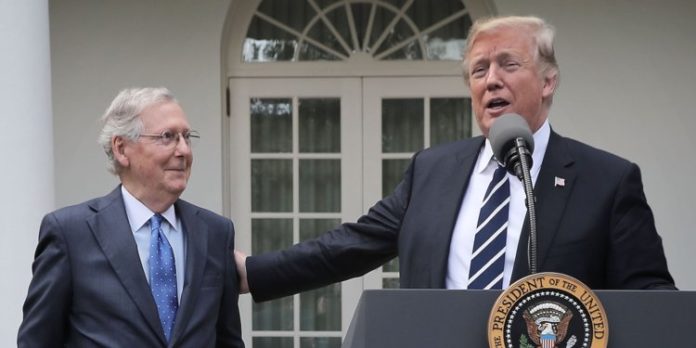 The news that broke this week about President Donald Trump reportedly demanding damaging information on former Vice President and Joe Biden has reignited calls for impeachment to be fast-tracked, but Speaker of the House Nancy Pelosi (D-CA) is said to be reluctant to punish Trump that way.

But Washington Post columnist Karen Tumulty notes in an op-ed that there’s an optional route for House Democrats, and unlike impeachment, Senate Majority Leader Mitch McConnell (R-KY) would be powerless to stop it.

“Should a House committee report a non-Member censure resolution, the full House may consider it by unanimous consent, under the Suspension of the Rules procedure, or under the terms of a special rule reported by the Committee on Rules and adopted by the House. 17 If widespread support exists for the censure resolution, unanimous consent or the Suspension of the Rules procedure may be used.”

Granted, it’s not impeachment, and it wouldn’t remove Trump from office, but it does force Republicans to go on the record one way or the other:

“This would not sate the appetite of the pro-impeachment forces, or end the debate over whether that step is warranted. But it could be done quickly, with the evidence at hand, and would have the benefit of forcing Republican members to go on record stating whether they do or do not find this behavior on the part of the president acceptable.”

Isn’t a censure merely symbolic? In a way it is, but it would make it clear that the GOP is willing to tolerate any and all bad behavior by Trump, no matter what he does, and that could be political poison in the 2020 election, Tumulty concludes:

“None of this would end the argument over impeachment, but it would prove to the American people that at least part of their government sets a higher standard of behavior than our current president does. It also, finally, would force Republicans to answer a question that they have been dodging: Is there anything this president does that you will not tolerate?”

Maybe censure would be a viable route to take since it’s clear that Republican-controlled Senate will never vote to convict Trump if he’s impeached. At least, as Tumulty rightly notes, it would let the American people know that there is a conscience in the Congress, and it resides with the Democrats.