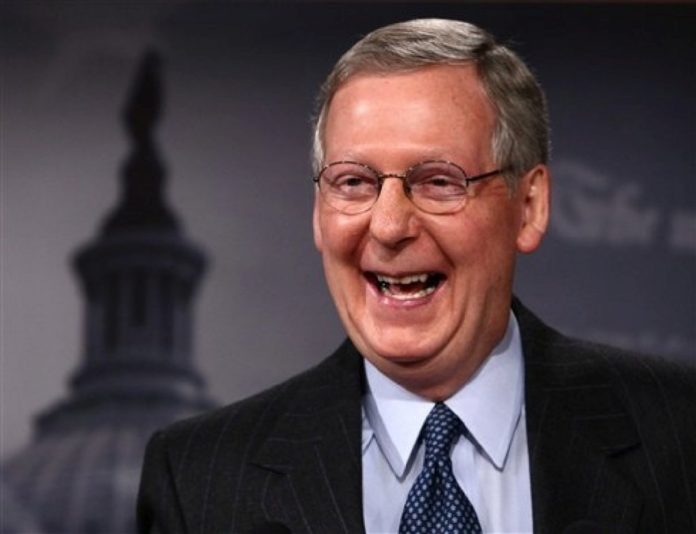 Just last month, Senate Majority Leader Mitch McConnell (R-KY) blocked legislation that would have directed federal funds to help pay for health care and pensions for coal miners in his home state of Kentucky. It’s legislation that many miners have been waiting on to help them pay their bills and fund treatment for conditions such as black lung disease, a common ailment among those who work in the dank and dirty coal mines of Appalachia.

And yet, a couple of months earlier, McConnell had eagerly supported a package of federal funds that provided funding for an aluminum plant in Ashland, Kentucky, that is controlled by a Russian billionaire oligarch with close ties to Russian President Vladimir Putin, the Daily Beast reports.

All of this is a perfect example of how McConnell has pulled what can best be called a legislative bait and switch that has enriched Russian oligarch Oleg Deripaska while leaving desperate coal miners high and dry. And here’s how McConnell did it:

“Since 2016 the federal government has given states in Appalachia millions of dollars from the Treasury Department to help clean up and reform abandoned coal mining land, and to assist in economic and community development in those areas. McConnell and other Kentucky lawmakers, including Rep. Harold Rogers (R-KY), have advocated that the state continue to receive that federal funding given the impact of coal companies’ bankruptcies. Two companies, EastPark Industrial and Ashland Alliance, applied for $7 million from the pot of federal money from the Kentucky state government in November 2017 for general sewer and road repair on 204 acres of land.”

But once the money had been allocated by Congress, McConnell and his allies in Kentucky moved the money from coal miners to the Rusal aluminum plant:

In October 2018, McConnell, Rogers, and Kentucky officials announced that EastPark and Ashland would get $4 million. Then, in March 2019, the applicants confirmed that the $4 million would not go to funding general repairs but would instead go prepping for construction on the aluminum plant.

As if that wasn’t bad enough, McConnell then screwed over coal miners in his state yet again when it was time to fund pension benefits for miners, blocking a bill sponsored by Senator Joe Manchin (D-WV) that would have steered millions to make sure retired coal miners had money to live on.

Manchin was enraged by McConnell’s move, issuing a statement that laid blame at the majority leader’s feet:

“There are amendments that benefit Americans and West Virginians that are being blocked by one person: Mitch McConnell. He is the sole person that is blocking a vote on my amendment to… secure coal miners’ health care and pensions, even though it has bipartisan support and would better the lives of every West Virginian, Kentuckian and American.”

All of this has led some coal miners in the Blue Grass State to threaten McConnell by giving their support to his 2020 Democratic opponent, Amy McGrath. Dwayne Thompson, a 72-year-old former Peabody Energy coal miner, remarked:

Despite what he’s already done to benefit a Russian businessman at the expense of his own constituents, McConnell bristles at being called “Moscow Mitch,” a nickname given to him by MSNBC host Joe Scarborough. But as the old saying goes, Actions speak louder than words.