The United States Blues
Home Elections Hillary Clinton expertly mocks Trump for obsessing over her at his re-election... 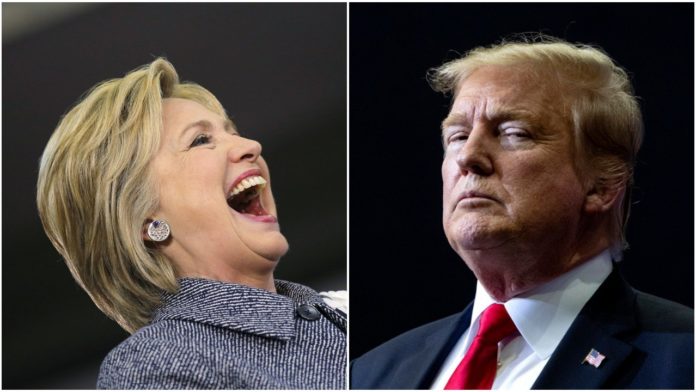 At his re-election kickoff rally Tuesday evening in Orlando, Florida, President Donald Trump mentioned Hillary Clinton so often that many who saw his speech wondered if perhaps they had traveled back in time to the 2016 campaign. As Politico noted:

By some counts, the president invoked the former secretary of State, his 2016 rival, at least seven times before even mentioning any of the two dozen Democrats looking to unseat him next year, railing repeatedly against “crooked Hillary” or the scandal over her private emails that dogged her 2016 campaign. The packed event even featured crowd chants of “lock her up,” which were a staple of Trump’s 2016 rallies.

.@HillaryClinton you must be EXHAUSTED! Cause you’ve been running through @realDonaldTrump small mind for a LONG time. ?

Others on Twitter also commented on Trump’s repeated mentions of his 2016 rival:

When Hillary Clinton runs in 2020, Trump is totally ready for her.

based on this speech so far, gonna be a tough race for hillary clinton

After two and a half years as President, Donald Trump is still talking about…. Hillary.

The only nice thing you can say about Trump’s sick obsession with Hillary is that it’s the longest he’s ever gone in his life focused on one woman.

But it was Hillary’s comment on the matter that perfectly sums up the Donald’s sick preoccupation with the person who beat him by almost 3 million votes:

I can handle it. Blessed with stamina. And thankfully I didn’t stay up late last night watching InfoWars…

Donald Trump loves to brag about how great he is. But he’ll go down in history as someone who lost the popular vote and needed the assistance of Russia to squeak out a win. And that’s why he feels a deep-seated need to attack Clinton three years after the 2016 election.