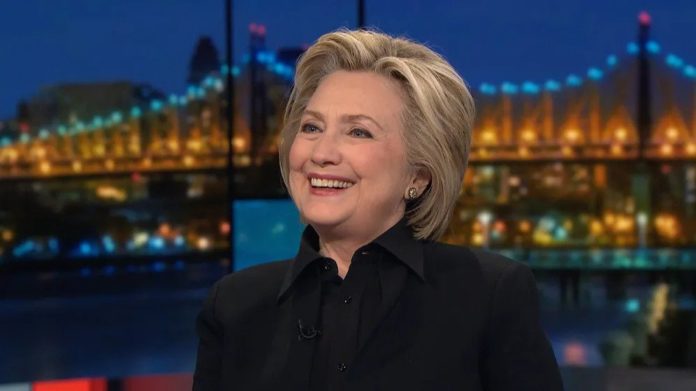 2016 Democratic presidential nominee Hillary Clinton said something Wednesday evening during an appearance on “The Rachel Maddow Show” that should terrify President Donald Trump: What if another country decides to help Democrats win the 2020 election at Trump’s expense?

Clinton said that while most Republicans are perfectly fine knowing that Russia actively worked to get Trump elected three years ago, one hypothetical situation might not be so agreeable to them:

“Imagine, Rachel, that you had one of the Democratic nominees for 2020 on your show and that person said, ‘Y’know, the only other adversary of ours, who’s anywhere near as good as the Russians, is China. So why should Russia have all the fun? And since Russia is clearly backing Republicans, why don’t we ask China to back us?’”

Clinton then referenced Trump’s infamous remarks during the 2016 race when he directly implored the Russians to find and release Clinton’s emails:

“Russia, if you’re listening, I hope you’re able to find the 30,000 e-mails that are missing. I think you will probably be rewarded mightily by our press. Let’s see if that happens. That will be next.”

So Clinton decided to engage in a bit of Trump trolling by commenting:

“China, if you’re listening, why don’t you get Trump’s tax returns? I’m sure our media would richly reward you.”

Here is Hillary Clinton’s hypothetical about a candidate calling on China to hack Trump’s taxes, and why Republicans putting partisanship over national security is a dangerous thing. pic.twitter.com/AIjJYRiTfE

Later in the interview, the former Secretary of State also noted that she finds it amusing how often Trump still refers to her in his tweets:

“I’m living rent free inside of Donald Trump’s brain, and it’s not a very nice place to be, I can tell you that.”

She said the same holds true for Congressional Republicans, who are constantly demand more investigations into her even though she isn’t even in government anymore:

“When in doubt, go after me…They know better. But this is part of their whole technique to divert attention from what the real story is. The real story is the Russians interfered in our election. And Trump committed obstruction of justice. That’s the real story.”

Imagine if China or some other country did release Trump’s taxes online. It’s a safe bet he’d declare a national emergency and have a very public meltdown. For that reason alone, it’s worth hoping for.