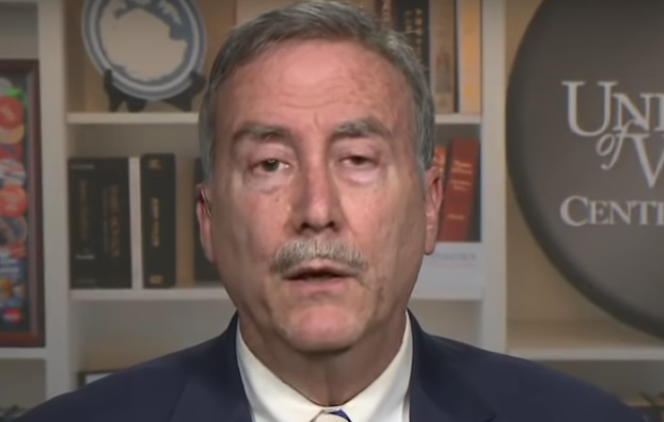 President Donald Trump got busted lying again after all four living ex-presidents denied offering him support for his wall, resulting in historian Larry Sabato brutally mocking him on Twitter.

During a news conference on Friday, Trump ranted about his wall, which he shut the government down over because Congress did not include money for it in spending bills passed by the Senate prior to Christmas.

Trump whined about past presidents and then claimed that “some of them” have offered support for his wall.

“This should have been done by all of the presidents that preceded me,” Trump said. “And they all know it. Some of them have told me that we should have done it.”

But that’s an outright lie that has since been slapped down by all of the four presidents who are still with us.

According to the St. Louis Post-Dispatch:

Obama spokesman Eric Shultz pointed to former President Obama’s various speeches slamming the idea of a border wall, a prestigious example of which is his keynote address at Rutgers University’s commencement on May 15, 2016.

“Suggesting that we can build an endless wall along our borders, and blame our challenges on immigrants — that doesn’t just run counter to our history as the world’s melting pot; it contradicts the evidence that our growth and our innovation and our dynamism has always been spurred by our ability to attract strivers from every corner of the globe,” Obama said.

And then former President Jimmy Carter, the oldest living ex-commander-in-chief, put the final nail in Trump’s coffin of lies by outright denying he discussed anything with Trump and spoke out against the wall.

“I have not discussed the border wall with President Trump, and do not support him on the issue.” — Jimmy Carter

It’s a pretty significant backlash as Trump prepares to lie his ass off in an address to the nation on Tuesday night to argue for his wall, which is why historian Larry Sabato mocked Trump in response to Carter issuing his response.

With Jimmy Carter’s denial, it’s now unanimous—no living ex-Presidents told Trump they supported the wall. But to be fair, what about the dead Presidents? After all, Nixon talked to the portraits on the White House wall back in 1974. Andrew Jackson’s right in Trump’s Oval Office.

This led to more mockery by Sabato and his Twitter followers.

And does anybody believe the loquacious Teddy Roosevelt ever fell silent? TR built a canal so maybe he thinks Trump is entitled to a wall.

I think you’re on to something. Unless it was just President Putin and President Xi he was talking about.

I’ve been in the Oval Office since the shutdown… he’s clearly not listening to me.

Walls do not make good neighbors.

Abraham Lincoln just telegraphed from the grave. No wall!

Trump is going to talk about his wall during his Oval Office address to the nation on Tuesday night. Democrats have been granted equal time by the networks and hopefully, he will be fact-checked in real-time. He has already lied repeatedly about immigration and his wall, including getting busted for lying about having support from past presidents. It’s important that Americans be informed about Trump’s lies as he spews them.