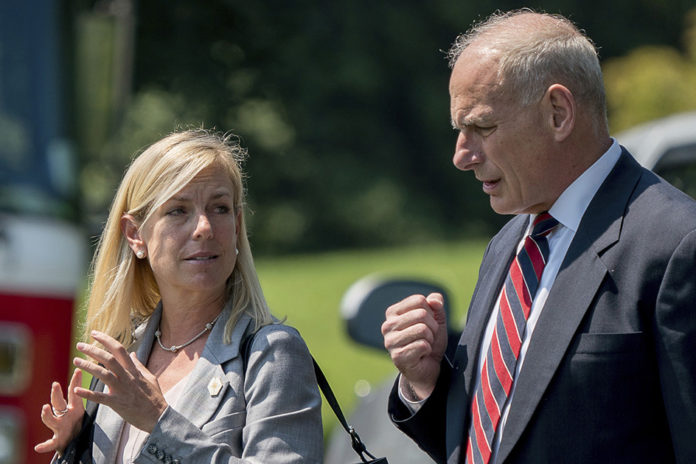 Trump’s nominee to head the Department of Homeland Security Kirstjen Nielsen told a Senate committee on Wednesday that she doesn’t believe there’s a need to build a wall on the U.S.-Mexico border “from sea to shining sea.”

Her remarks on the matter contrast directly with Trump’s campaign pledge. Our toddler-in-chief isn’t going to enjoy this!

In response to questions from the Homeland Security Committee, Nielsen proposed to work with “state and local actors on the ground” to find the best solutions for border security, Reuters reports. These include options for increasing the use of unmanned surveillance aircraft.

Senator Claire McCaskill, the ranking Democrat on the Homeland Security Committee, raised concerns about the fact that no cost-benefit analysis had been done on the proposed wall as compared with other homeland security initiatives facing cuts under Trump’s budget.

“These decisions shouldn’t be based on politics.” – Sen. Claire McCaskill

So far, only prototypes of the wall have been produced, and funding for the wall remains in question. And it should remain in question. A logical person would look at the proposal and think, “Why are we spending money that could be used to support universal healthcare and free access to higher education on an (insert expletive here) wall?”

If confirmed, Nielsen will head a department of more than 240,000 employees responsible for issues ranging from U.S. border and airport security to immigration policy, disaster response, and refugee admissions.

Nielsen is a cybersecurity expert and plans to emphasize such matters.

“Cyber criminals and nations states are continually looking for ways to exploit our hyperconnectivity.” – Kirstjen Nielsen

Nielsen does, unlike some of Trump’s other nominees, have experience in the department she will head. She served as Special Assistant to the President for Homeland Security and was involved in revising disaster relief policies after Hurricane Katrina in 2005.

A Democratic senator asked whether Nielsen believes that humans activity is the primary cause of climate change. She answered, “I do absolutely believe that the climate is changing and that there are many contributions.”

That is not a straight answer. Nielsen comes off as quite qualified and will perhaps place a bit of a damper on Trump’s rampantly irresponsible border security agenda. But pay close attention to her actions. As we have learned repeatedly, any nominee Trump makes will likely benefit the Republican plan – overtly or not.