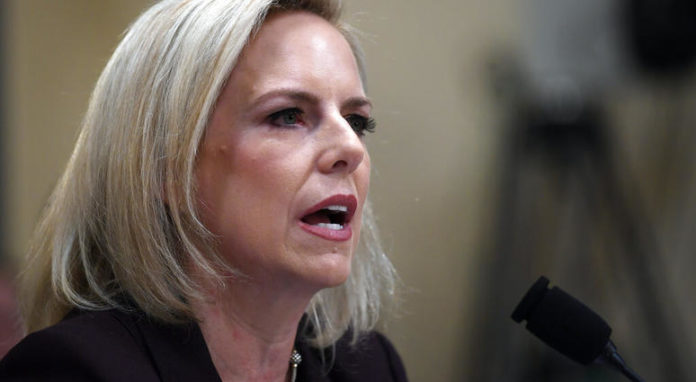 With the U.S. Senate prepared to pass a resolution later today that would reverse President Donald Trump’s declaration of a national emergency on border security, the head of the agency that oversees immigration is complaining that Congressional oversight of her department is complaining that she fears for American democracy.

“You know, I said it before, but I really fear for our democracy when the body who creates the laws is telling the body who enforces the law just don’t enforce the law. If they don’t like the law they should change it, but the men and women at the Department of Homeland Security have sworn an oath to protect communities to secure the homeland and to enforce the law that Congress passed.”

What Secretary Nielsen fails to realize or appreciate is that members of Congress have also sworn an oath and they, unlike her, were actually elected by the people of this country, not just appointed by a president who lost the 2016 election by 3 million votes and may well have been aided by a foreign country in securing his electoral college victory.

Politico reports that DHS is under increasing scrutiny for their so-called “enforcement” of immigration law:

Trump, backed up by Nielsen and others at DHS, has insisted that there is a humanitarian and national security crisis at the nation’s southern border, prompting him to declare a national emergency to secure funding for his long-promised border wall without appropriations from Congress.

Asked about Trump’s emergency declaration, Nielsen insisted the president had every right to declare an emergency, despite growing furor over the move among members of his own party. Nielsen also claimed that Congress has tried to politicize her agency’s mission in recent years:

“Many of the policies and the ways in which CBP has been protecting our community for decades are the same — they’re just suddenly now political and partisan.”

Perhaps if Ms. Neilsen’s boss wasn’t so blatantly partisan and political, he’d get the benefit of the doubt on issues such as the wall and his emergency declaration. And if his policies weren’t so draconian, he might also have more support for his plans.