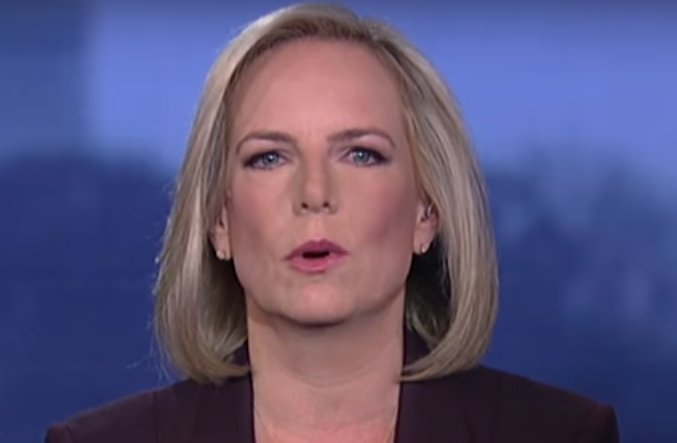 A week after a 7-year-old girl died in Border Patrol custody of exhaustion and dehydration, Homeland Security Secretary Kirstjen Nielsen blamed the death on the girl’s parents.

The Guatemalan family had crossed the border illegally in desperation for medical attention for their child, but rather than receive immediate medical attention, Border Patrol held the family for hours before finally relenting. By then, it was tragically too late.

During an interview on Fox & Friends on Friday, Nielsen responded.

“[I]t’s heart-wrenching,” Nielsen began. “My heart goes out to the family – all of DHS. You know, this is just a very sad example of the dangers of this journey. The family chose to cross illegally. What happened here was they were 90 miles away from where we could process them. They came in such a large crowd, it took our Border Patrol folks a couple of times to get them all. We gave immediate care, we’ll continue to look into the situation, but again I cannot stress how dangerous this journey is when migrants choose to come here illegally.”

FOX & FRIENDS: What do you know about the 7-year-old girl who died in Border Patrol custody?@SecNielsen: “This is just a very sad example of the dangers of this journey. This family chose to cross illegally… I cannot stress [enough] how dangerous this journey is.” pic.twitter.com/bjFMdFlW3E

First off, blaming desperate parents for the death of their child is absolutely heartless and ignores the fact that Border Patrol held this girl for hours before finally getting her medical attention. As we should all know, time is everything when treating life-threatening medical issues. Clearly, this girl did not get any water from agents, and they did not handle the emergency like an emergency. It’s simply inhumane.

According to CBP, the girl was traveling with a group of 163 migrants and was in CBP custody for more than eight hours before she started having seizures. She was transported to a hospital in El Paso, where she died. CBP says she “reportedly had not eaten or consumed water for several days.”

Of course, even the White House is blaming the girl’s parents and is using the tragedy to call for passing funding for Trump’s wall, claiming that a wall and other measures will somehow prevent migrants from trying to cross illegally. However, had the Trump administration hired more agents to process migrants faster, there would not be long lines at ports of entry that force desperate people to take desperate action.

But even so, Border Patrol should have given this little girl immediate medical care and water. They didn’t, and that’s tantamount to murder.

Furthermore, it’s entirely possible the family did search for water during their journey, but it should be pointed out that border agents have been filmed literally dumping life-saving water supplies that have been left by humanitarian organizations in certain spots to help migrants stay hydrated and alive in the desert heat.

Here’s a video of a border agent dumping gallons of water via YouTube.

Kirstjen Nielsen and the Trump administration have created a humanitarian crisis on the border that will not end as long they are in charge. More migrants, including children, will die seeking or waiting for asylum in this country. And it’s downright criminal, not to mention a crime against humanity that should result in many Border Patrol agents and Trump officials being tried at the International Criminal Court at The Hague. And the truly sad part is that they would still be treated better in prison than this little girl was treated by Trump’s jack-booted thugs.