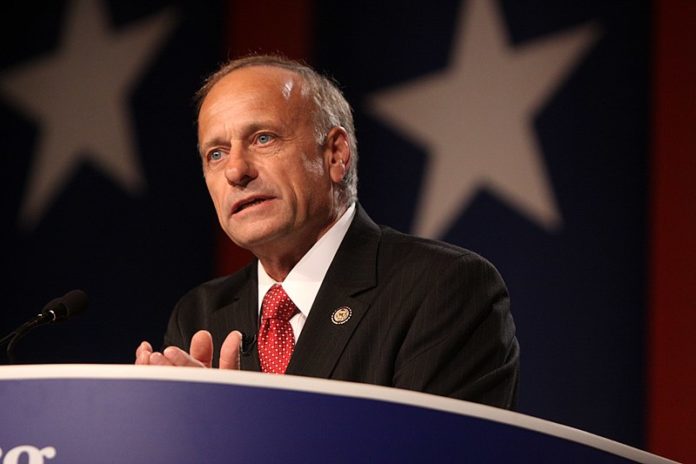 Racism and hate have finally caught up to Rep. Steve King (R-Iowa) as it appears the House of Representatives is preparing to censure him after years of outrageous remarks that came to a head last week during an interview that caused national outrage.

In the interview, King said there’s nothing wrong with white supremacy and argued that such language is not offensive.

“White nationalist, white supremacist, Western civilization — how did that language become offensive?” he asked before complaining that America is “no country for white men.”

Of course, white nationalism and white supremacy are racist beliefs that white people, particularly white men, are superior to all other races on the planet, and considering the widespread diversity of our nation in the 21st century, it should not be difficult for King to know why those beliefs are offensive.

Even many Republicans were offended by the remarks, including Senate Majority Leader Mitch McConnell (R-Ky.):

“There is no place in the Republican Party, the Congress or the country for an ideology of racial supremacy of any kind,” McConnell said. “I have no tolerance for such positions and those who espouse these views are not supporters of American ideals and freedoms. Rep. King’s statements are unwelcome and unworthy of his elected position. If he doesn’t understand why ‘white supremacy’ is offensive, he should find another line of work.”

In fact, House Republicans punished King by removing him from his seats on the Judiciary and Agriculture Committees.

But King may not be done getting punished as Rep. Bobby Rush (D-Ill.) intends to offer a resolution that would censure him, a humiliating punishment on the House floor that would force King to be shamed publicly by his colleagues.

“Steve King’s pattern of despicable comments harken back to the dark days of American history where his rabid, racist remarks would have been acceptable to a significant portion of our nation,” Rush said in a statement. “This must come to a screeching halt right now. The U.S. Congress cannot be a platform for Steve King and those of his ilk. From Charleston to Charlottesville to Chicago to California, there is no home for this behavior, especially the floor of the United States House of Representatives.”

“He has become too comfortable with proudly insulting, disrespecting, and denigrating people of color,” Rush continued. “As with any animal that is rabid, Steve King should be set aside and isolated. His rabid racism continues to stain and embarrass this body and the years of deliberate silence from Republicans have only emboldened his ignorant and immoral behavior and empowered those who emulate him.”

Indeed, there’s literally a long list of the many racist statements King has made over the years that should have gotten him censured or even ousted many times, including comparing immigrants to dogs, attacking Muslim babies, and comparing transgender troops to castrated slaves.

Rush criticized Republicans for letting him get away with such statements until now, and called upon every person in Congress to support censure”

“Republicans, in the interest of political expediency, sought his endorsement, ignored his racist remarks, and continued to elevate him to positions of influence. Only now that his behavior is well known to those outside the beltway and tainted him politically, do they vigorously denounce him. Knowing this, no reasonable person should take their tweets, statements, and op-eds seriously. I call on Minority Leader Kevin McCarthy to withhold from Steve King the privilege of serving on any committee until he apologizes for his racism.”

“My resolution to censure Representative King sends a clear message to the American people — this Congress will not turn a blind eye to his repugnant and racist behavior,” he concluded. “Anything short of censure would be shallow.”

King is an embarrassment to Congress, the nation and his state. Iowa voters should be ashamed of him and should work to oust him, which they will get the chance to do in 2020.