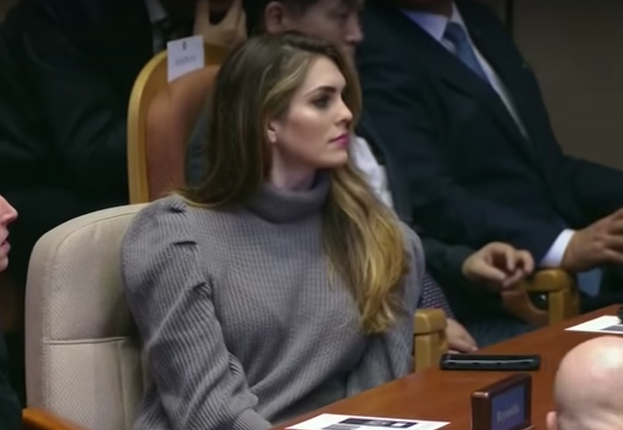 House Judiciary Committee Democrats slammed former Trump adviser Hope Hicks on Wednesday for ducking even the most innocuous of questions as her Department of Justice attorney repeatedly objected during the hearing.

The White House claims that Hicks has “immunity” from questions about her time working for President Donald Trump’s administration, a claim that House Speaker Nancy Pelosi (D-Calif.) has already referred to as obstruction of justice.

Despite the claim of immunity, a privilege that doesn’t actually exist, Hicks showed up to the hearing to comply with the subpoena. But she refused to answer any questions about her time in the White House, even going so far as to refuse to answer questions about where her office was located or whether she told the truth to Special Counsel Robert Mueller, who mentioned her in his final report 184 times.

Even simple questions from Republicans drew objection from Hicks’ attorney, turning the entire non-public testimony into what one Democrat called a complete “farce.”

I am watching Obstruction of Justice in action, as @TheJusticeDept is objecting to everything that Hope Hicks wants to say during her tenure in the White House. The Administration’s position is absurd & they will lose in court.

What is the @realDonaldTrump Administration hiding? https://t.co/BqhkJJlbU5

This is what it’s like for the interview of Hope Hicks (questions modified but you’ll get the point):

Chair: Ms. Hicks, was it a sunny day on your first day of work?

Chair: Where was your office located?

More absurdity from @TheJusticeDept attorney in the Hope Hicks interview.

Republican Member: Ms. Hicks, did you previously testify before Congress?

Republican Member: Did you testify voluntarily?

Rep. Pramila Jayapal (D-Wash.) called her testimony “absurd” on Twitter and a “farce” to reporters.

I went from listening to Trump lawyers exert absurd “complete immunity” for Hope Hicks–she wasn’t even allowed to say if she told mueller the truth!–to amazing #PoorPeoplesCampaign hearing. I am looking at the true Patriots who say truth & represent the best of America. 🙏🏾🙏🏾✊🏾 pic.twitter.com/625i6CWkhN

UPDATE: Rep. Jayapal says the Hicks interview is a “farce.” Says White House lawyer’s won’t even let her say if she told the truth to Mueller, where she sat inside the West Wing and won’t formally claim privilege despite refusing to answer questions.

.@davidcicilline says Hope Hicks has answered *some* questions but mostly — so far — she is hiding behind the claim that she is immune from speaking about events related to her WH time. Says the president’s lawyers are directing her not to answer questions.

This hearing should have been public so that Americans could watch as Hicks and her lawyer obstructed justice. It’s time for Democrats to stop tolerating this lack of cooperation and start throwing people in jail.