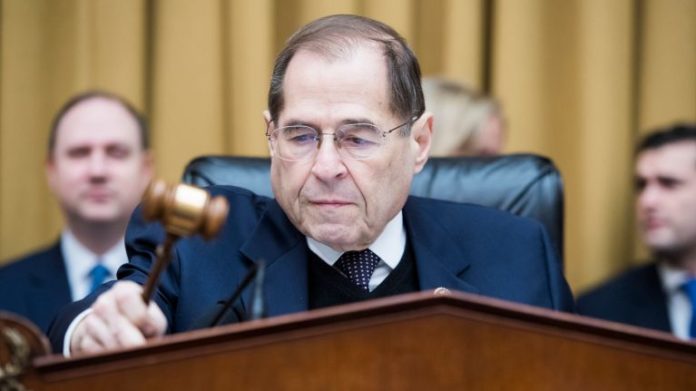 Jerry Nadler (D-NY), the chairman of the House Judiciary Committee, is warning Attorney General William Barr that he can either release the full Mueller report to Congress immediately or face legal action.

In a blistering op-ed he wrote for the New York Times, Nadler slammed Barr for his four-page summary of the Mueller report, which is over 400 pages long:

“We — the members of the Judiciary Committee, the House of Representatives and the entire American public — are still waiting to see that report. We will not wait much longer. We have an obligation to read the full report, and the Department of Justice has an obligation to provide it, in its entirely, without delay. If the department is unwilling to produce the full report voluntarily, then we will do everything in our power to secure it for ourselves.”

Nadler also accuses the AG of usurping the authority of Congress and unilaterally declaring President Donald Trump innocent without providing evidence of such a conclusion:

“By offering us his version of events in lieu of the report, the attorney general, a recent political appointee, undermines the work and the integrity of his department. He also denies the public the transparency it deserves. We require the full report — the special counsel’s words, not the attorney general’s summary or a redacted version.”

The conclusion of Nadler’s op-ed is perhaps what should draw the most attention from Americans, because it calls for new legislation to protect the nation from the possibly illegal actions of future presidents:

“We must make it harder for future presidents to behave this way. We need a full accounting of the president’s actions to do that work.

“When the full scope of the president’s misconduct has been revealed, when his lies are debunked and his abuses have been laid bare, I believe that members of Congress on both sides of the aisle will draft legislation to curb the worst of his offenses. Put another way: If President Trump’s behavior wasn’t criminal, then perhaps it should have been.”

Barr says the full report will be available by mid-April. But Congress should have already received it, and the American people also deserve to see it. After all, we paid for the thing.