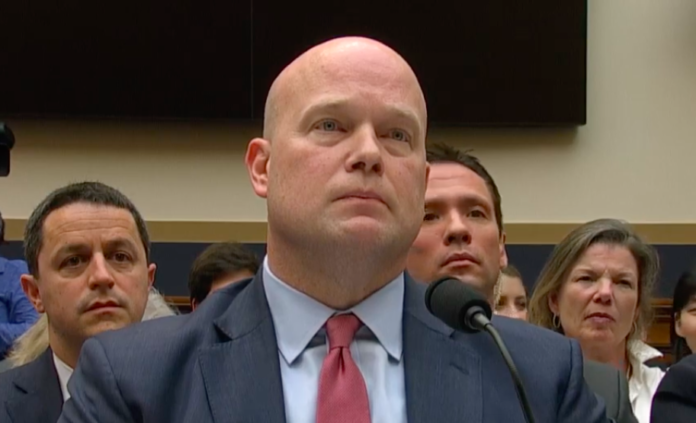 Acting attorney general Matt Whitaker could be in legal trouble for the evasive responses he gave to the House Judiciary Committee last week, and now that same committee is demanding that Whitaker “clarify” his answers or face even bigger headaches.

The chairman of the judiciary committee, Jerry Nadler (D-NY) sent a letter to Whitaker on Wednesday that reads in part:

“You repeatedly refused to offer clear responses regarding your communications with the White House, and you were inconsistent in your application of the Department’s policy related to the discussion of ongoing investigations.

“Your testimony on this topic is directly contradicted by several media reports.”

Politico also reports that Nadler’s committee is especially interested in conversations Whitaker may have had with President Donald Trump regarding the ongoing investigation being conducted by Special Counsel Robert Mueller:

“The New York Democrat’s request includes the possibility that the Judiciary Committee could have direct evidence indicating that Whitaker lied during his testimony.

“This point is specifically addressed when Nadler writes of Whitaker’s answers to questions about whether or not he spoke with President Donald Trump about the decision by Michael Cohen, the president’s former longtime lawyer and fixer, to plead guilty in federal court to lying to Congress and violating campaign finance law by arranging hush money payments on Trump’s behalf.”

Nadler also made it clear that if Whitaker refuses to voluntarily comply with his request, he will not hesitate to demand a formal deposition from the acting AG.

Shareblue Media notes that Whitaker was evasive on several matters the committee asked about, and at one point was even disrespectful to Nadler:

“There was the part where Rep. Pramila Jayapal (D-WA) asked him about Trump’s family separation policy, and he tried to deny it even existed, relenting only after she read him a memo about that policy.

“And there was also the part where he tried to evade answering a question from the chair of the committee … by telling him, snarkily, that his time was up.”

The Justice Department declined to comment on the letter from Congressman Nadler, but if Whitaker continues to ignore Nadler’s letter, he could well be facing a contempt of Congress charge.