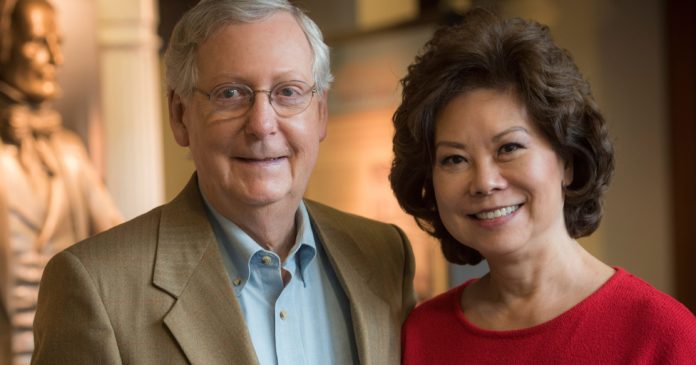 Transportation Secretary Elaine Chao — whom you may also know as the wife if Senate Majority Leader Mitch McConnell — was told on Monday by the House Oversight and Reform Committee that she needs to turn over documents which may prove conflicts of interest regarding her cabinet position and the shipping company owned by her family, according to the New York Times:

The House Oversight and Reform Committee asked Transportation Secretary Elaine Chao on Monday to turn over documents related to communication with her family’s shipping company as the panel stepped up an investigation into whether any actions taken by Ms. Chao amount to a conflict of interest.

The committee, led by Rep Elijah Cummings (D-MD), is investigating policy decisions made by Chao as head of the Department of Transportation and the Foremost Group, a New York City-based shipping company owned by Chao’s family.

According to the letter sent by the committee to Secretary Chao:

“Federal regulations prohibit federal employees from using their public offices for the ‘private gain.’ Several reports indicate that you have used your official position to benefit Foremost Group, a shipping company owned by your father and sisters that is headquartered in New York and operates a fleet that transports materials to and from China.”

The letter also references Chao’s failure to sell her interest in the Vulcan Materials Company as she had once promised. Vulcan, it should be noted, manufactures road construction materials, all of which fall under the purview of Chao’s department.

The matter of Secretary Chao is yet another example of how many in this administration appear to be profiting from their government posts. President Donald Trump has been accused of doing the same and is currently being sued over charges that he has violated the Emoluments Clause of the U.S. Constitution, which specifically prohibits federally elected officials from accepting money or other benefits from foreign governments or entities.

A spokesperson for Chao maintained that she has never used her office to boost or benefit Foremost Group.