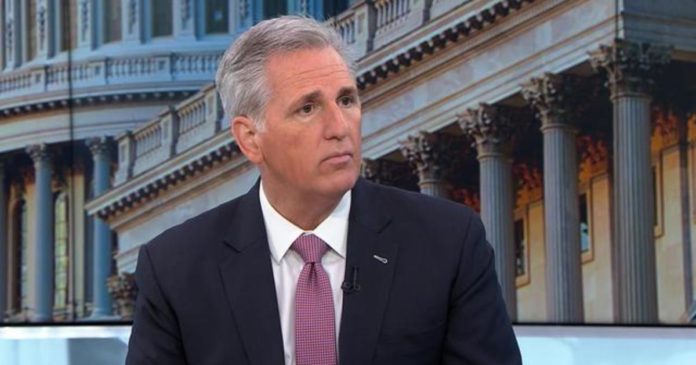 House Minority Leader Kevin McCarthy (R-CA) is saying that most Republicans have been unwilling to: Their repeated attempts to take health care away from millions of Americans by repealing Obamacare cost them the 2018 midterm election.

The Washington Post reports that McCarthy made his comments during a meeting with GOP donors:

McCarthy also blamed the far right Freedom Caucus Republicans for their unwillingness to compromise on the Affordable Care Act (ACA):

“‘When we couldn’t pass the repeal of Obamacare the first way through, an amendment came because the Freedom Caucus wouldn’t vote for’ the original House bill, McCarthy said. ‘that amendment put [the] preexisting condition campaign against us, and so even people who are running for the very first time got attacked on that. And that was the defining issue and the most important issue in the race.'”

However, while McCarthy may feel comfortable pointing the finger at those to the right of him politically, he neglected to mention that by March 2014, Congressional Republicans had voted on Obamacare 54 times, including measures to undo, update, or change it, Time magazine reports.

And perhaps more importantly, despite his whining that the GOP attempt to repeal Obamacare cost his party the House, McCarthy didn’t tell donors that he and his fellow Republicans wouldn’t try yet again to kill the ACA if they have a chance. President Donald Trump has repeatedly said a full repeal of Obamacare is one of his top priorities, and many Republicans ran on the issue in 2018, pretending they wanted to protect Americans with preexisting conditions despite their voting records suggesting otherwise.

Health care will be an issue in 2020, as well. And if voters again see the GOP as the party that wants to take away their health insurance, Republicans could find themselves losing the Senate and White House, too.