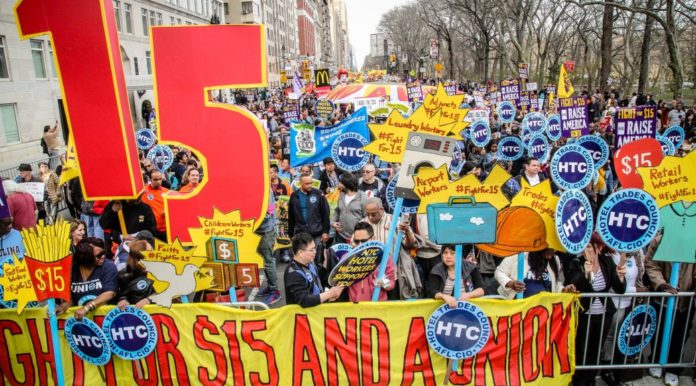 On Monday, the Congressional Budget Office (CBO) released a report with a finding regarding the push for a $15 national minimum wage, and it showed that such a move would increase wages for at least 15 million Americans could potentially cost between zero and 3.7 million jobs.

That was all it took for House Republicans to begin circulating erroneous talking points about the CBO report and suggesting that paying American workers a living wage was outright “socialism.”

The report’s median estimate was that “1.3 million other workers would become jobless,” and found a “two-thirds chance that the change in employment would be between about zero and a decrease of 3.7 million workers,” while 1.3 another million people would be lifted out of poverty.

The report also contained this paragraph:

“Findings in the research literature about how changes in the federal minimum wage affect employment vary widely. Many studies have found little or no effect of minimum wages on employment, but many others have found substantial reductions in employment.”

That was all the GOP needed to take a shred from a massive report and begin spinning their own version of “fake news” as the leader of their party is so fond of calling anything he disagrees with.

Notice the use of the word “would,” which is nowhere to be found in the CBO report. It quite clearly used the word “could.” There’s an enormous difference between the two words.

Yet Democrats are about to again put their socialist agenda above workers & ram a reckless $15 minimum wage bill through the House. https://t.co/WGtqTAoIKW

The facts when it comes to a living wage are far different from the load of bull being spewed by Republicans:

January 2019 report published by the National Bureau of Economic Research, for example, examined 138 “prominent state-level minimum wage changes between 1979 and 2016” and found that “the overall number of low-wage jobs remained essentially unchanged over five years following the increase.”

A 2018 study by the Institute for Research on Labor and Employment at the University of California at Berkeley similarly detected “no significant negative employment effects” in several cities that had recently raised their minimum wages to more than $10 per hour.

But those studies don’t support the Republican narrative of how evil it is to pay people enough to afford their rent or raise and feed their families. Anyone who supports such a move is automatically deemed a “socialist.”

Make no mistake: Republicans would be only too happy to see the minimum wage repealed entirely and let multinational corporations pay as little as they want, no matter the consequences. They’re in the pocket of the wealthy and powerful. Everyone else is expendable.

Featured Image Via Fight for 15