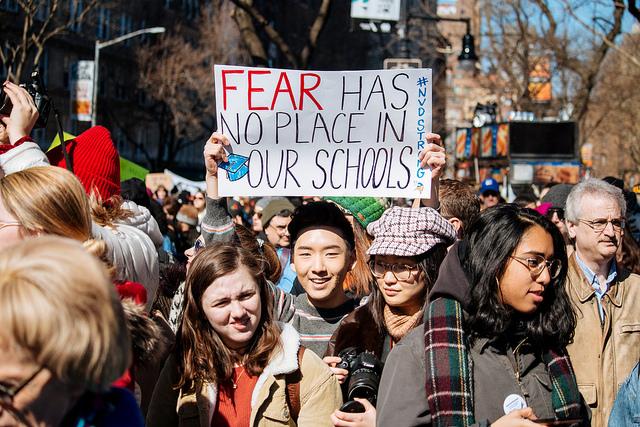 During a hearing of the House Education Committee on Wednesday, Republican Rep. Virginia Foxx (NC) and her fellow Republicans on the committee attempted to remove all references to school shootings from a piece of legislation designed to collect information on school shootings, according to Shareblue Media:

The committee was discussing H.R. 4301, a bill that would require the Departments of Education, Justice, and Health and Human Services to publish an annual report on school crime and safety, including data on school shootings.

But Foxx wasn’t having it. She offered an amendment that stripped out all references to school shootings, arguing that collecting information about children being shot was too “complex.”

This is GOP Rep. @virginiafoxx offering the amendment that set off the firestorm. She said that the government should use existing (incomplete) data for gun violence in schools instead of adding “complex” and “subjective” information. About how children are being shot. pic.twitter.com/uYdPIO0bhH

The move by GOP members of the committee was met with disbelief and scorn from Democrats, with Rep. Lucy McBath (D-GA), who lost her only son to gun violence, noting:

“What are my Republican colleagues simply afraid of? Are you afraid that the federal data on gun violence will confirm what we know to be true? Gun violence in America is a public epidemic that has to be solved. Any other public health epidemic, we would be putting forth all the resources, all the data, all the research to solve it.

“I think this amendment is cowardly It’s insulting to the hundreds of thousands of Americans that are impacted by gun violence every single day.”

“I oppose this amendment because it is gutless. It is insulting to the work we are trying to do. This amendment goes so far as to delete the word ‘shooting’ from the bill.”

Foxx’s amendment was eventually defeated by a vote of 25-22, with all of the Republicans on the committee voting to support removing any mention of shootings in the bill. The legislation now advances to the full House for a vote.

Of course, even if the bill does pass in the House, it will probably never even be debated in the Senate thanks to Senate Majority Leader Mitch McConnell (R-KY):

In February, the full House passed two pieces of gun safety legislation, the first such bills in a generation. While both received some support from Republicans, both passed despite overwhelming opposition from the GOP and unanimous support from Democrats.

Both those bills have been blocked by … McConnell for more than 200 days.