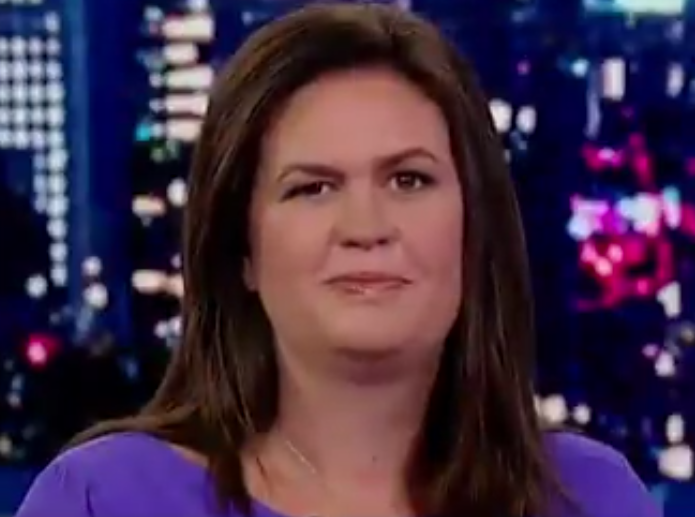 Disgraced former White House Press Secretary Sarah Huckabee Sanders continued disgracing herself on Saturday night during an interview on Fox News by blaming mass shootings on protests against her for lying to the American people.

During her tenure in the White House, Huckabee Sanders was known to be as much of a liar as President Donald Trump. And her lies were so insulting and pervasive that the public began shunning her in protest, including a restaurant owner who kicked her out rather than serve a public official who spouts propaganda as if we’re North Korea instead of the United States.

But Huckabee Sanders insulted the victims of mass shootings in this country by being yet another conservative who wants to avoid the issue of guns. Instead, she ranted about morality and claimed that protesting against her and Trump is the reason why we see more mass shootings. Seriously.

“I think the big part of the problem that we’re missing and one of the things we’re not doing, is this is not as much a gun issue as it is a moral issue,” Huckabee Sanders claimed. “We have to look for ways to bring this country together. We have to look for ways that we can have discussions and disagree with people without being kicked out of restaurants, without fear of losing our job. It all goes back to having respect for each other and I think we need to have a step back and not make this a gun issue, but this heart issue.”

This is quite the “like father, like daughter” moment because Mike Huckabee has claimed that mass shooting are increasing because we’re not shoving religion down people’s throats.

She then pivoted even further away from guns by blaming Democrats and abortion for mass shootings.

“We’re a culture that no longer values life,” she said. “You look at some of the things that are happening right now and how some of the Democrats, the comments they’ve made about the pro-life community, we are not valuing life. And when we do that, we put, I think, everybody in jeopardy. I think we really have to take a look at how we have this conversation. Make it less about guns, more about respect and treating each other the way we would want to be treated.”

Yeah, how about tell that to right-wing white nationalists who are the ones shooting places up? Also, tell your former boss to start treating people with respect. Because leadership starts at the top and Trump has demonstrated time and time again that he’s a bully who incites violence, including the mass shooting in El Paso last month.

“This is the third IG report to come out and show that Comey was a liar and leaker that he disgraced himself and did a total disservice to the FBI. We are seeing more and more reasons as to why The President was right in firing James Comey. “ – @SarahHuckabee pic.twitter.com/6UUlY10ntP

If Fox News wanted to present itself as a network with even less credibility, they succeeded by hiring Huckabee Sanders.