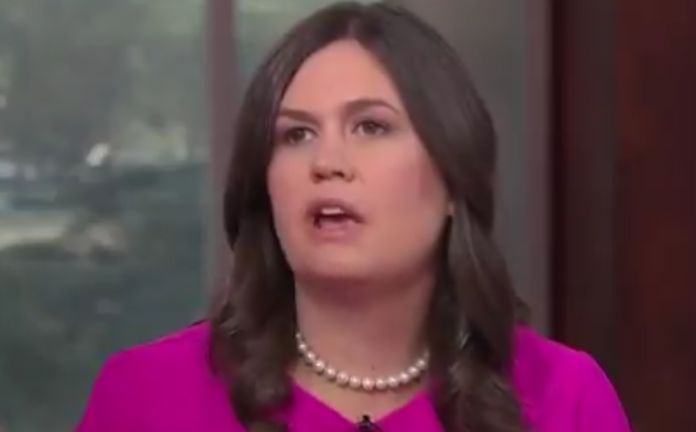 White House press secretary Sarah Huckabee Sanders has not read the Mueller report and she apparently has not read Attorney General William Barr’s summary either since she repeatedly lied about President Donald Trump being “totally exonerated” on Monday.

Barr’s summary clearly states that the report “does not exonerate” Trump, but Huckabee Sanders desperately insisted that it does during an interview on the TODAY Show.

Today Show host Savannah Guthrie pointed out that the report doesn’t exonerate Trump and even read Barr’s summary to her before asking her to concede the point.

“Would you acknowledge it is incorrect for the president to call this a total exoneration?”

Trump proclaimed “total and complete exoneration” on Twitter Sunday even though that’s not what the report says. And Huckabee Sanders repeated Trump’s lie in response.

“It is a complete and total exoneration,” Huckabee Sanders said. “Because the Special Counsel said they couldn’t make a decision one way or the other, the way the process works is that they leave that up to the Attorney General.”

Guthrie reminded viewers and Huckabee Sanders that Barr is biased against the Mueller report and has been from the start long before he was ever appointed by Trump.

Indeed, Barr had already argued that it’s impossible for a president to obstruct justice in June 2018 and wrote a 19-page memo to the Justice Department in opposition of the Russia probe.

In no way is Barr a non-partisan actor here. Instead, he’s a Trump crony through and through who should not have been able to determine whether Trump obstructed justice or not.

But Huckabee Sanders continued to insist that the Mueller report completely exonerated Trump even though she is not a lawyer and has zero legal experience.

“In the legal community, when you can’t convict somebody on something, you’re legally exonerating them,” she said.

“Would you acknowledge it is incorrect for the President to call this a total exoneration?” @savannahguthrie asks @PressSec Sarah Sanders about the question of if President Trump obstructed justice pic.twitter.com/I0XnGlYWCU

Watching @TODAYshow and seeing Sarah Huckabee Sanders dance around the questions like Charley Chaplin…one thing she’s right on though…tired I eating about it. pic.twitter.com/TGs7dtCClJ

Lying Sarah Huckabee Sanders comes out on @TODAYshow to spin “Trump exonerated” when he wasn’t. Her job is a waste of taxpayers dollars, when she lies to Americans at every opportunity. @NBCNews @PressSec #ReleaseTheFullReport #MuellerReport

The #BarrLetter sounds like a big whopper, so what should we do, America ?
Bring on Trump’s biggest whopper teller, Sarah Huckabee Sanders! @TODAYshow#RESIST #FakeNews #ReleaseTheFullMuellerReport

Savannah Guthrie just wiped the floor with Sarah Huckabee Sanders. My Advice: Someone without a legal background should NOT attempt to argue the law with someone who has a JD while on live TV. #TodayShow

“The findings of the Department of Justice are a total and complete exoneration of the President of the United States.”

“While this report does not conclude that the President committed a crime, it also DOES NOT EXONERATE HIM.”

She hasn’t seen the Mueller Report.

The bottom line is it’s time to release the full report and then we’ll know exactly how full of sh*t Huckabee Sanders is.