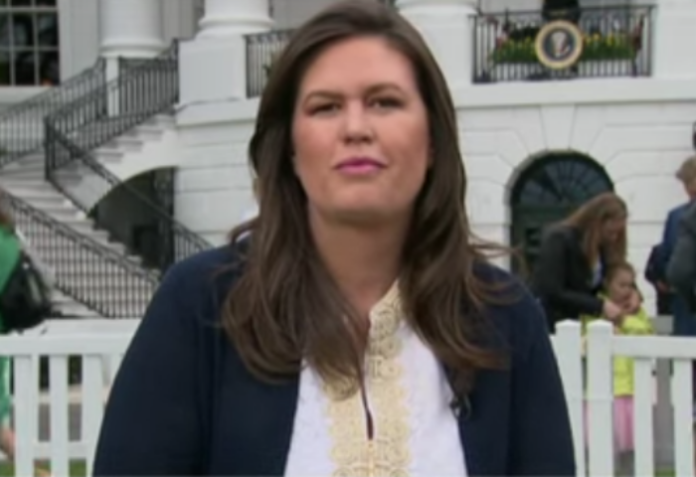 After the Mueller report detailed Huckabee Sanders’ lie to the American people that President Donald Trump fired former FBI Director James Comey because “countless” FBI agents lost confidence in his leadership, Ryan called for her and other Trump officials to be fired by using a common metaphor.

“She outright lied, and the people, the American people, can’t trust her,” Ryan said. “They can’t trust what’s said from the president’s mouthpiece, spokesperson, from the people’s house. When there is a lack of credibility there, you have to start lopping the heads off. It’s ‘Fire Me Thursday’ or ‘Fire Me Good Friday.’ She needs to go.”

Obviously, Ryan did not literally mean Huckabee Sanders should be beheaded. She makes that clear in her very next line. But Huckabee Sanders decided to mischaracterize what Ryan said by accusing her of calling for her to be murdered.

“I have had reporters say a lot of things about me,” she complained. “They’ve said I should be choked. I should deserve a lifetime of harassment, but certainly never had anybody say I should be decapitated. It takes us to a new low, even for liberal media. It once again proves why this journalist isn’t taken seriously. I think our team needs to remain focused on how we keep pushing those things that actually help Americans and not engage in these petty fights with journalists that again shouldn’t be taken seriously.”

Even the Fox & Friends chyron at the bottom of the screen clearly states that Ryan called for Huckabee Sanders to be fired, all while she smugly accused Ryan of wanting her executed.

But the fact is that she is lying again and ignoring Ryan’s own claim of having video evidence of her father Mike Huckabee calling for her to be “gutted like a deer.”

That’s a true death threat or incitement of violence against a journalist. And now Huckabee Sanders is demonstrating exactly why she should be fired and shunned by slandering that same journalist with false accusations.