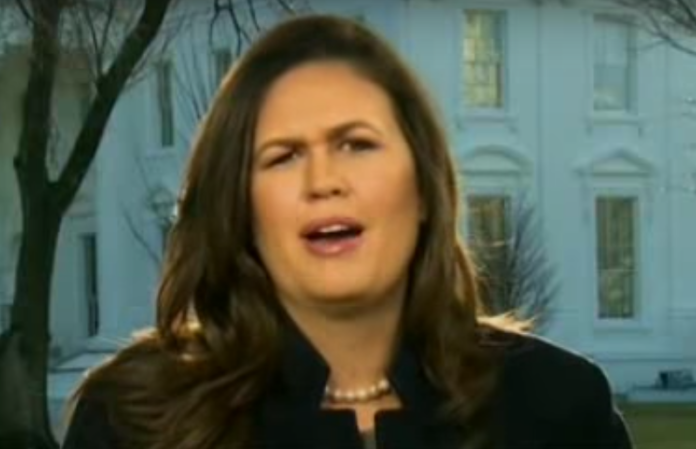 During Trump’s El Paso rally on Monday night, one of his supporters attacked a BBC cameraman in yet another aggressive act against the press, which Trump has repeatedly referred to as “the enemy of the people.”

After being asked about the incident on Wednesday, Huckabee Sanders once again lied to defend her boss by pretending that Trump has never encouraged violence.

“The idea that the president or anybody on his team or in his administration would encourage violence is absolutely absurd,” Sanders said. “The president stopped, asked and made sure everyone was okay before continuing on with the event. Certainly, we condemn violence in any form against anyone, and that certainly includes the press.”

The problem is that Huckabee Sanders’ claim has been repeatedly debunked since there’s plenty of documented instances of Trump telling his supporters that he’ll defend them if they hurt protesters at his rallies.

In Cedar Rapids, Iowa, on the day of the Iowa caucuses, for instance, he told audience members he would pay their legal fees if they engaged in violence against protesters.

“If you see somebody getting ready to throw a tomato, knock the crap out of them, would you? Seriously, OK? Just knock the hell … I promise you I will pay for the legal fees. I promise, I promise,” he said on Feb. 1, 2016.

At a Las Vegas rally later that month, he said security guards were too gentle with a protester. “He’s walking out with big high-fives, smiling, laughing,” Trump said. “I’d like to punch him in the face, I’ll tell you.”

A similar situation unfolded at a rally that month in Warren, Michigan.

“Get him out,” he said of a protester. “Try not to hurt him. If you do, I’ll defend you in court. Don’t worry about it.”

Furthermore, Trump has posted memes on Twitter promoting violence against CNN and even once praised a Republican candidate for assaulting a reporter for asking questions.

Clearly, Huckabee Sanders is not telling the truth and Fox & Friends should have challenged her. But as usual, they let her get away with lying again.