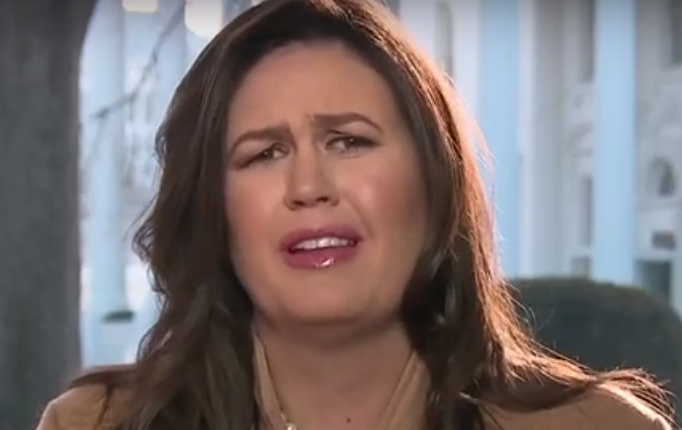 White House press secretary Sarah Huckabee Sanders desperately tried to defend President Donald Trump on Tuesday morning during an interview on CNN in which she was asked about the corruption of Trump’s inauguration committee.

On Monday, federal prosecutors issued a subpoena for a wide range of documents from Trump’s inauguration committee related to the $100 million in donations raised and how it was spent.

It discloses that prosecutors are investigating a litany of potential crimes: conspiracy against the US, false statements, mail fraud, wire fraud, money laundering, inaugural committee disclosure violations, and violations of laws prohibiting contributions by foreign nations and contributions in the name of another person, also known as straw donors.

On Tuesday, CNN host John Berman asked Huckabee Sanders about the subpoena. She replied, of course, by claiming that Trump’s inauguration committee has nothing to do with Trump himself.

“What I do know at this point is that this has nothing to do with the White House,” Huckabee Sanders said.

Berman called bullsh*t and pointed out that Trump is the “common thread” in all the investigations against him, which now includes probes of the Trump Organization, the Trump campaign, the presidential transition team, his election, and his inauguration.

She then went on to desperately distance Trump from Paul Manafort and Roger Stone, both of whom have been indicted by Special Counsel Robert Mueller — and said all of the investigations are nothing more than schemes to topple Trump’s presidency, which she laughably claimed is the most successful in history.

Berman again corrected her by observing that both Manafort and Stone served on Trump’s campaign, which involves Trump. He also wanted to know why Trump is considering burying the Mueller report instead of making it public if he really believes he did nothing wrong, a question Huckabee Sanders evaded.

As the top man in all these organizations, campaigns, and committees, one would think that Trump had to have known what was going on. Either Trump knew what was going on and is complicit or he didn’t know and is incompetent. Either way, he’s ultimately responsible for all activities under his watch and saying that he has nothing to do with any of it is a pathetic lie.