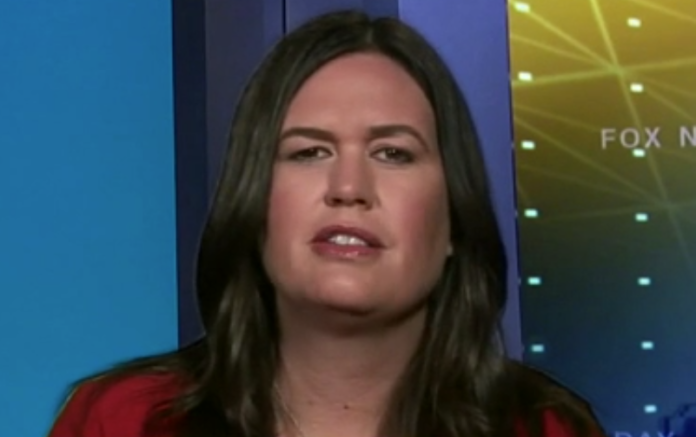 The House Ways and Means Committee sent a letter to the IRS over the weekend demanding six years of Trump’s tax returns by an April 23rd deadline, suggesting that the next step will be a subpoena to force the IRS and Treasury Secretary Steve Mnuchin to obey the law that gives Congress the power to obtain tax returns from any American, including government officials.

Trump insists that he can’t or won’t release his taxes because he’s supposedly being audited, but that excuse no longer flies because even people under audit can release their taxes.

“The president has been clear from the beginning,” she began. “As long as his taxes are under audit, he’s not going to release them.”

“Will he tell the IRS not to release them?” Wallace asked.

And that’s when she invented two more excuses for why Trump shouldn’t have to release his taxes.

“We’ll have to see what happens on that front,” Huckabee Sanders replied. “One of the biggest things that I think people aren’t seeing is the fact that the only reason that the Oversight Committee has the ability to request someone’s taxes is for the purpose of determining policy.”

The problem with that argument is that the 1924 law Democrats are citing to procure Trump’s taxes was passed to help Congress investigate corruption within the executive branch.

According to CNN and University of Virginia law professor George Yin:

At the time, lawmakers were looking into several matters involving possible transgressions in the executive branch, during Warren G. Harding’s Administration, according to Yin. They were seeking to investigate the returns of those involved in the Teapot Dome Scandal, which concerned alleged bribery of government officials by private interests to gain leases to public oil fields.

They also were looking into potential conflicts of interest involving Treasury Secretary Andrew Mellon, who kept his hand in business while in office. Some also wanted to learn how Mellon might be affected by the tax legislation Treasury was proposing. And lawmakers wanted to assess whether Mellon was given favorable treatment by the Bureau of Internal Revenue, the equivalent of today’s IRS.

Considering Democrats are investigating Trump for possible money laundering connected to his contacts with Russia and possible tax evasion and insurance fraud, his tax returns are important evidence.

Huckabee Sanders then argued that House Democrats are “not smart enough” to understand Trump’s taxes anyway.

“This is all about political partisanship,” she continued. “This is a dangerous, dangerous road. And, frankly Chris, I don’t think Congress, particularly not this group of congressmen and women, are smart enough to look through the thousands of pages. Most of them probably don’t do their own taxes. And I certainly don’t trust them to look through the decades of success that the president has and determine anything.”

Chris asks @PressSec if the President will tell the IRS not to release his tax returns #FNS pic.twitter.com/RBaVniYMKj

It should be pointed out that Trump doesn’t do his own taxes either and Congress has tax experts and attorneys ready to analyze Trump’s taxes whenever they receive them.

In short, none of Huckabee Sanders’ excuses justify Trump’s refusal to release his taxes and the law is firmly on Democrats’ side.