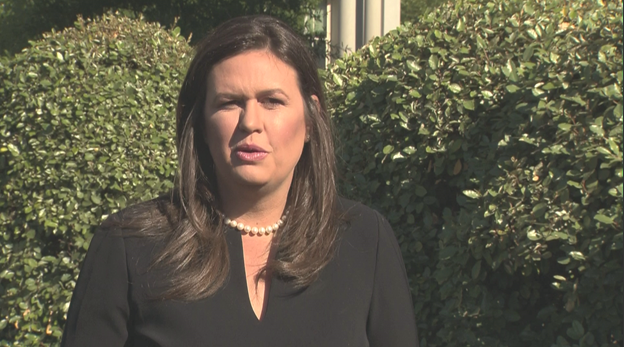 White House Press Secretary Sarah Huckabee Sanders attacked former Vice-President and 2020 Democratic presidential candidate Joe Biden on Tuesday morning ahead of a devastating speech he is set to deliver in Iowa to make his case against President Donald Trump.

“How many sleepless nights do you think Trump has had over what he is doing to America’s farmers?” Biden is reportedly going to ask according to an advance copy of the speech. “Here’s the answer, as many as he had when he stiffed the construction workers, electricians, and plumbers who built his hotels and casinos — zero.”

Biden will also slam Trump’s ignorance of economics, his attacks against Americans while on foreign soil and his disastrous foreign policy.

While speaking to a gaggle of reporters on Tuesday, Huckabee Sanders lashed out at Biden and tried to blame him for Russian interference during the 2016 Election.

When asked about Joe Biden campaigning in Iowa today since Pres. @realDonaldTrump will be there as well, @PressSec says, “I’m sure Biden has a lot of questions he needs to answer himself.”
Biden reportedly plans to call Pres. Trump an “existential threat.”

Sanders went on to say that Biden, “was part of the administration that allowed Russia to interfere in our election… they allowed China to continue to grow.”

Asked about Biden’s advance text calling @POTUS “an existential threat,” @PressSec dismisses as “truly laughable” and says Obama-Biden policies toward Iran, North Korea and China, give Biden “a lot of explaining to do.” Not sure if @POTUS will fire back while in Iowa. pic.twitter.com/LtjVZn39dv

Obama and Biden sought to stop Russian interference by seeking to warn the American public about the attacks, but Republicans refused to join him and threatened to accuse Obama of interference if he spoke out. Trump, meanwhile, welcomed help from Russia and his campaign even met with the Russians in Trump Tower to discuss dirt on Hillary Clinton. Trump has spent the last two years obstructing the investigation into Russian interference and still continues to deny that it even happened.

As for Iran, Obama struck a deal with Iran curbing its nuclear program. The deal made the world safer, but Trump withdrew from it and Iran is threatening to restart their program because Trump refuses to honor the agreement.

Furthermore, when Obama considered meeting with Kim Jong Un, conservatives lost their minds. But now they are okay with Trump cozying up to a ruthless dictator who wants to kill us. The hypocrisy here is stunning.

If Huckabee Sanders and Trump think they can attack Biden effectively on these points, they should rethink their strategy because it’s only going to backfire on them.