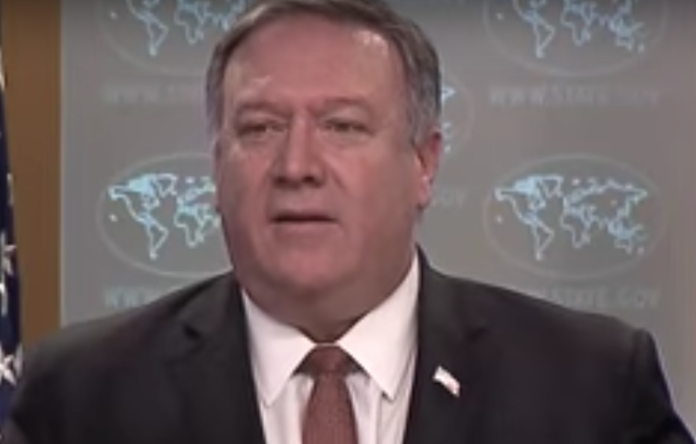 Secretary of State Mike Pompeo is actively trying to block the International Criminal Court from pursuing Americans and Israelis who have committed war crimes and crimes against humanity, a move that is drawing condemnation from human rights advocates.

While delivering remarks to the press on Friday, Pompeo announced that a policy is currently being implemented by President Donald Trump’s administration that would prevent ICC officials from entering the United States by stripping their visas, which would result in war criminals in the United States getting away with their crimes against humanity.

“The court could eventually pursue politically motivated prosecutions of Americans,” Pompeo claimed even though the court is an impartial judicial body based in The Hague in the Netherlands, a U.S. ally.

Pompeo said that Trump is “determined to protect the American and allied military and civilian personnel from living in fear of unjust prosecution for actions taken to defend our great nation.”

One of those actions could include kidnapping children from their parents and imprisoning them in internment camps, which is a crime against humanity and a serious violation of human rights committed by the Trump administration.

The move would also apparently prevent the court from prosecuting Israelis who commit war crimes against Palestinians.

“These visa restrictions may also be used to deter ICC efforts to pursue allied personnel, including Israelis, without allies’ consent,” Pompeo said. “Implementation of this policy has already begun.”

Amnesty International USA’s Daniel Balson called the policy “the latest attack on international justice and international institutions by an administration hellbent on rolling back human rights protections. Throwing roadblocks in front of the ICC’s investigation undermines justice not only for abuses committed in Afghanistan, but also for the millions of victims and survivors throughout the world who have experienced the most serious crimes under international law.”

“This is an unprecedented attempt to skirt international accountability for well-documented war crimes that haunt our clients to this day,” Dakwar said. “It reeks of the very totalitarian practices that are characteristic of the worst human rights abusers, and is a blatant effort to intimidate and retaliate against judges, prosecutors, and advocates seeking justice for victims of serious human rights abuses.”

Human Rights Watch international justice director Richard Dicker referred to it as “an outrageous effort to bully the court and deter scrutiny of U.S. conduct.”

The United States is supposed to be prosecuting war criminals, not hiding them and shielding them from justice. This is a terrible policy that will only reduce American prestige and respect around the globe. Trump has no business being president if he won’t bring human rights abusers to justice. And if anyone deserves to be prosecuted for crimes against humanity in America, it’s Trump. So it looks like this is a blatant effort by Trump to evade international justice. But while he can escape for now, the next president could and should reverse this decision and follow through on our promise from decades ago to chase war criminals to the ends of the Earth, even if they are Americans and Israelis.