The United States Blues
Home News Huntsman And McCain Of ‘The View’: Trump’s Too Stupid To Be A... 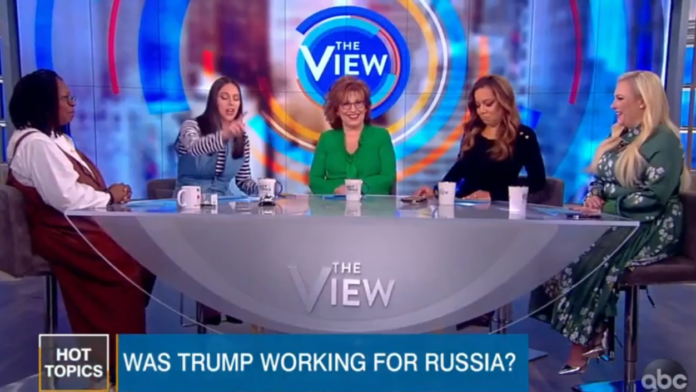 The question is being asked around the United States and the world: Is is possible the President Donald Trump is working on behalf of Russia as a double agent, a spy?

That was the topic of debate on “The View” Monday morning, with the two conservative co-hosts — Abby Huntsman and Meghan McCain — suggesting that Trump simply may not be intelligent enough to be a spy.

“I don’t think anyone has the answers right now. I was just as shocked by it. Frankly, of all the things we’ve talked about at this table, this is by far — I don’t even have a word for it — the craziest, because we’re now in this place where you either are going to have a President Trump who wins another four years or he gets ousted from office for potentially — or for being an agent for the Russians. Like, we’re just in this really strange place as a country.”

When co-host Joy Behar suggested that it’s difficult to know about covert operations being conducted since most of us don’t have access to top secret intelligence, Huntsman wondered aloud:

“Is Trump capable, though, of covert operations?”

All of the panelists began laughing, and McCain finally added:

“That is a good point. I mean, you know, he can barely run our country, let alone — it’s hard for me to think he would be this brilliant espionage spy, but I put nothing off the table anymore in 2019, because I think we’re on Earth 2 and there’s some parallel universe where, like, Jeb Bush is president and I’m happy and it’s different.”

Of course, to hear Trump tell it, he’s one of the smartest people on the planet. He has said the following about his so-called intelligence over the years:

….Actually, throughout my life, my two greatest assets have been mental stability and being, like, really smart. Crooked Hillary Clinton also played these cards very hard and, as everyone knows, went down in flames. I went from VERY successful businessman, to top T.V. Star…..

You know the only kind of people who brag about how smart they are? Stupid people.