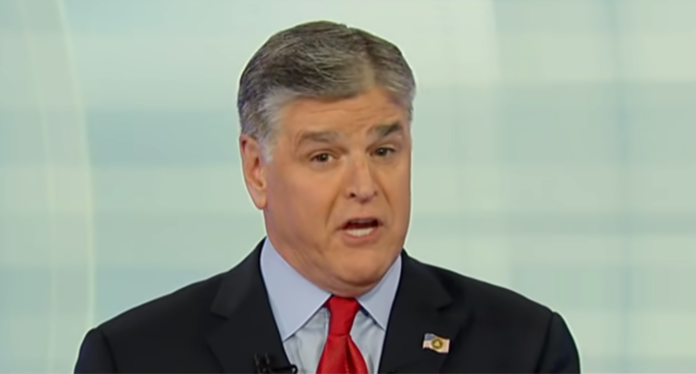 Fox News host Sean Hannity, much like his political savior, President Donald Trump, is a  hypocrite who loves to attack those who disagree with him but cannot accept criticism aimed in his direction.

The perfect example of this came on Hannity’s show Thursday night, when he railed against Speaker of the House Nancy Pelosi (D-CA) for saying she didn’t want to see Trump impeached and would prefer to see him “in prison.” According to Hannity, that’s the sort of thing they do in “banana republics.”

“Based on no actual crimes, she wants a political opponent locked up in prison? That happens in banana republics ― beyond despicable behavior. And, by the way, they would literally turn, in many ways, the USA into a country we no longer recognize.”

And yet, as Mediate notes, Hannity had no problem at all with Trump’s recitation of the line “lock her up” when he referred to Hillary Clinton during the 2016 presidential campaign:

Hannity’s outrage over the criminalization of politics strains credulity, to say the least. The president’s 2016 campaign notoriously made “lock her up” — a direct threat to imprison Hillary Clinton — one of its signature rallying cries. Relatedly, a transcript search of Fox News for just the past 12 months finds that Hillary Clinton’s name has been mentioned at least once on more than 240 of Hannity’s shows, or nearly every single broadcast (some of which were reruns). During this same period, Hannity offered up no public criticism of “lock her up.”

Also, Hannity never once complained when Trump said during one of the debates with Clinton that he wanted to place her in jail. When Clinton said it was a good thing Trump wasn’t in charge of the nation’s laws, he interjected:

“Because you’d be in jail.”

Where’s Hannity’s outrage over that comment? Where’s his concern about a “banana republic” when Trump says he’s going to have his attorney general, William Barr, investigate anyone who was part of the Russia probe?

Hannity, just like Trump, can dish it out, but he sure can’t take it. Their hypocrisy is staggering.