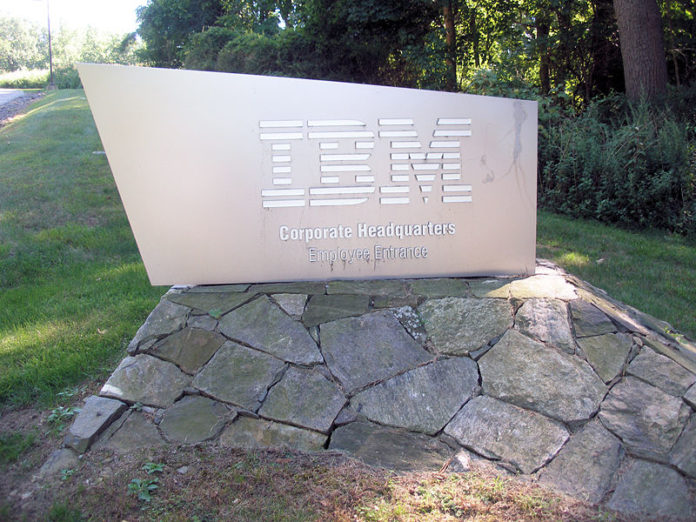 IBM is under fire after one of their employees posted a vile threat against former President Barack Obama on Twitter Friday in response to President Donald Trump’s claim that Obama is involved in a conspiracy to take him down.

Trump launched the attack as part of a larger diatribe against the Russia investigation and Special Counsel Robert Mueller.

After one Twitter user noted that Trump once again is obsessing over Obama, self-proclaimed Senior Business Consultant at IBM Corporation Jim Boka violated IBM’s social media standards by claiming Obama will be killed and actually volunteered to be one of his killers.

“Get used to it,” Boka wrote in the now-deleted tweet. “If he’s lucky he’ll go to prison, but most likely Obama will be shot for treason. And I volunteer to be on the firing squad. I’ve been saying this for ten years.” 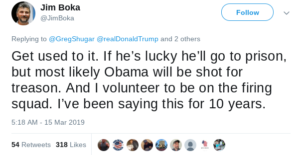 Twitter users responding by bombarding IBM with complaints informing them of their employee’s threatening hate speech.

Hey @IBM …I’m curious to know what you think about one of your employees who wants to volunteer in a firing squad to shoot a former President of the United States. Is this something @IBM supports? pic.twitter.com/gajGHCPeyo

Hey @IBM I want an answer to this

Indeed. @IBM one of your employees just volunteered to shoot a former president, the kind of thing the @SecretService frowns pretty highly on, as do most businesses.

Yes, @IBM I want a response to this, too. Your employee is openly discussing assassinating a former president. You ok with that?

@IBM Is this the image IBM wants? pic.twitter.com/5kxMHH9qXZ

This is the type of filth you employ at IBM? People who make threats against a former POTUS? pic.twitter.com/2PA9ZuN3f0

Boka, of course, doubled down on his own Twitter feed.

I’m getting a big kick out of the fools that actually think I said something anyone with two brain cells would think threatening. The derangement runs deep in this crowd. I spoke future facts.

But he likely won’t be laughing for long since one Twitter user pointed out that Boka violated IBM’s social media policy.

And I’M getting a big kick out of IBM
‘s employee social media policy! Hilaaaarious! You messed up Jimmy boi! BIGLY! pic.twitter.com/qcxB4fxW5f

Boka can’t be fired for being a Trump supporter, but he can be fired for making vile remarks about a former president. His comment is an embarrassment to the IBM brand, and the company must take action or be accused of endorsing such statements by their employees.