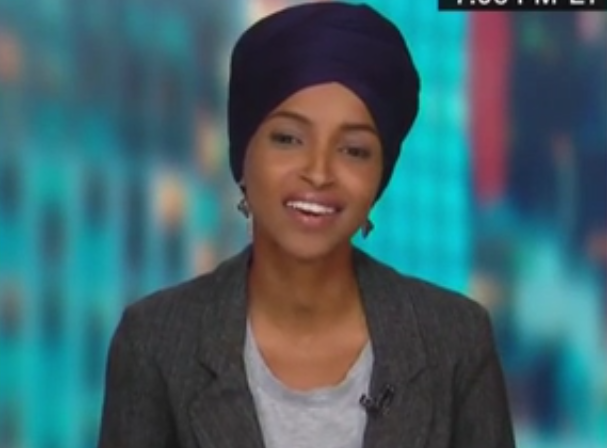 Rep. Ilhan Omar (D-Minn.) made a great point during an interview on CNN Monday night when she responded to President Donald Trump’s warmongering against Iran.

The problem is that Trump is compromised by his business ties in Saudi Arabia, which makes him more likely to help the Saudis satisfy their thirst for war against a nation that would be a second Vietnam.

Trump is already selling weapons to the Saudis and let them off the hook for the brutal murder of journalist Jamal Khashoggi.

Clearly, if Saudi Arabia wants a war with Iran, Trump may be all too eager to send American troops to fight and die over there.

That’s why Omar strongly opposes Trump having any war powers, especially since Trump lies about something as simple as the weather.

“Congress has the constitutional right to declare war,” Omar reminded CNN host Erin Burnett. “The president doesn’t have it, secretary of state doesn’t have it, and Saudi Arabia certainly doesn’t have it. I think we need to make sure that the American people understand that this administration that lies about weather maps or crowd sizes cannot be trusted to give us the full information we need to be able to make a decision whether we should be going to war or not with Iran. We are not in a position to think about another endless war, and I really hope that my colleagues in Congress are going to pressure this administration to take a step back and figure out how we use diplomacy in the escalating situation.”

Indeed, Trump repeatedly insisted that Alabama would be in the path of Hurricane Dorian, only to be called out by the National Weather Service for spreading false information.

If Trump is so willing to lie about a hurricane, you know he’ll lie about Iran to justify a war.

Omar also pointed out that Trump is beholden to the Saudis and their business.

“I mean, this is a president, if you remember, Erin, who talked about how Saudi Arabia buys apartments from him and spends lots of money on his businesses and that’s why he’s friends with them,” she said. “I think it’s really important for us to remember that Saudi Arabia is actively engaged in war in Yemen. They attacked Yemen. The Houthis have taken responsibility on this particular attack.”

Then, like Senator Rand Paul (R-Ky.) did on Sunday, warned that we cannot let Iran become like the Iraq War, which was started based on lies.

“We have to be very cautious about the way that we move forward, and I think that’s why it’s important for Congress to be able to investigate and take the lead on whether it makes sense for us to engage,” she concluded. “It’s really important for us to remember this is a war — our intelligence is war-tainted towards Iran and, you know, we can’t forget our involvement in Iraq, and how there are people who beat the drums of war and ultimately make us regret a decade or so later.”

Democratic Rep. Ilhan Omar dismisses President Trump’s ability to navigate escalating tensions with Iran, pointing to the controversy over Hurricane Dorian’s path and whether it would hit Alabama. pic.twitter.com/gOK5WYqYAk