The United States Blues
Home National News Immediately after Mueller was appointed, Trump told AG Sessions, ‘This is the... 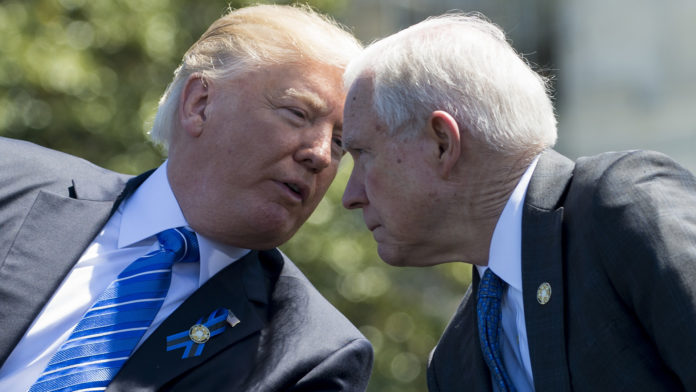 According to a portion of the report compiled by Special Counsel Robert Mueller, shortly after Deputy Attorney General Rod Rosenstein appointed Mueller, President Donald Trump told then-Attorney General Jeff Sessions that it was the end of his presidency:

“Oh my God. This is terrible. This is the end of my presidency. I’m fucked.”

Trump also told Sessions that he should never have recused himself from the Russia investigation and the Mueller probe would ruin what he wanted to do as president:

“Everyone tells me if you get one of these independent counsels it ruins your presidency. It takes years and years and I won’t be able to do anything. This is the worst thing that ever happened to me.”

As The Daily Beast reports, this was just one instance where Trump appeared to have the intent to commit obstruction of justice:

“Following the firing of James Comey as director of the FBI and the appointment of Mueller as special counsel, the report states, the president’s behavior towards the FBI and its investigation into Russian interference in the election became hostile, both in public and private: “At that point, the president engaged in a second phase of conduct involving public attacks on the investigation, non-public efforts to control it, and efforts in both private and public to encourage witnesses not cooperate with the investigation.

“While the president’s public attempts to tell witnesses not to cooperate with the investigation were ‘unusual,’ the report states, ‘no principle of law excludes public acts from the reach of the obstruction laws. If the likely effect of public acts is to influence witnesses or alter their testimony, the harm to the justice system’s integrity is the same.'”

This is just the first of what will be many instances of obstruction in the report, but it certainly suggests there is plenty of evidence for impeachment if Congress chooses to do so.