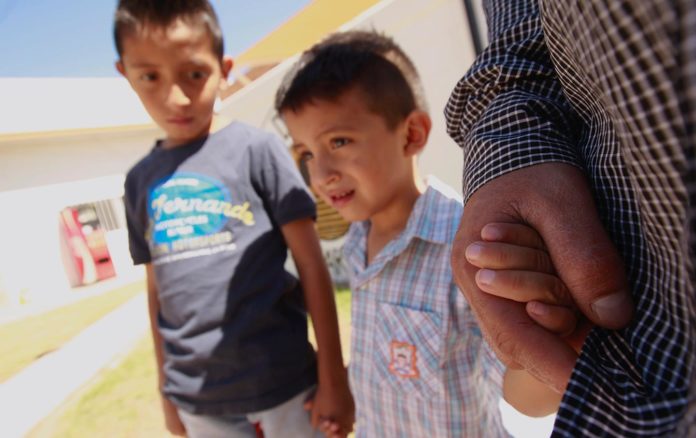 The Trump administration’s own inspector general for the Department of Health and Human Services is reporting that immigrant children who have been separated from their parents and held in detention suffer from mental health issues ranging from extreme fear, feelings of abandonment, and post-traumatic stress disorder (PTSD), which is most commonly found in combat veterans, the Associated Press (AP) reports:

“You get a lot of ‘my chest hurts,’ even though everything is fine” medically, a clinician told investigators. The children would describe emotional symptoms: “Every heartbeat hurts,” or “I can’t feel my heart.”

Children separated during the Trump administration’s “zero tolerance policy” last year, many already distressed in their home countries or by their journey, showed more fear, feelings of abandonment and post-traumatic stress symptoms than children who were not separated, according to a report … from the inspector general’s office in the Department of Health and Human Services.

Some children, the report noted, cried uncontrollably while others were angry and confused. “Other children expressed feelings of fear or guilt and became concerned for their parents’ welfare.”

Dr. Gilbert Kliman, a child psychiatrist who interviewed dozens of immigrant children, said that while children can indeed move on with their lives once the trauma of separation ends, they may never fully get over it.

Kliman also predicted that among the children he had seen, there would likely be “an epidemic of physical, psychosomatic health problems that are costly to society as well as to the individual child grown up. I call it a vast, cruel experiment on the backs of children.”

In the report, Deputy Inspector General Ann Maxwell writes that the differences between children who were taken from their parents and those who weren’t were unmistakable:

“Facilities reported that addressing the needs of separated children was particularly challenging, because these children exhibited more fear, feelings of abandonment and post-traumatic stress than children who were not separated. Separated children are also younger than the teenagers facilities were used to caring for.”

The IG report covers a critical period in the administration’s policy of separating families seeking asylum in the United States: A specific period last year when at least 2,500 children were separated from their parents or loved ones. The children were kept in border custody while their parents were transported to federal court for criminal proceedings. Any child kept beyond a 72-hour period was then transferred to the custody of HHS and placed in shelters.

One of the most heartbreaking stories in the IG report involves a young child who was traumatized by the entire process:

In one case, a child was moved from a Florida facility to Texas to be reunited with her father. After the child made several trips to the detention center, she was returned to the Florida facility “in shambles,” without ever seeing him.

Is this what now passes for the “compassionate care” HHS promises to provide to immigrants?