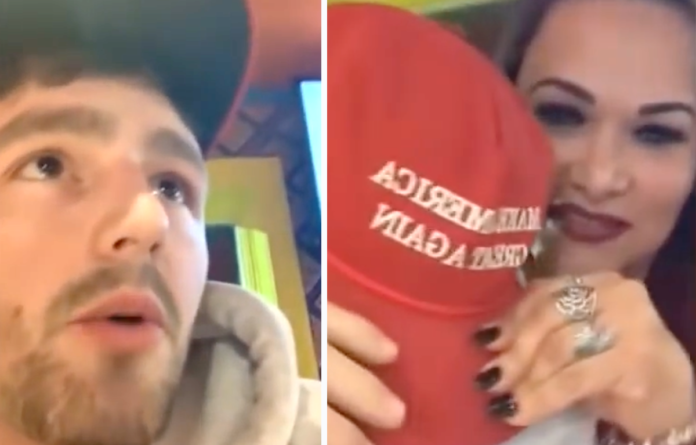 Trump supporters may be in total denial about what their red MAGA hats truly represent. The rest of us know they are the hat of choice for white supremacists, the so-called Alt-right, and hate groups. Just as the phrase “Alt-right” was coined to hide the real identity of racists, the red hat has become “the new white hood” to many people.

So one would think that people wearing such proclamation of ignorance on their heads would think twice before dining at a Mexican restaurant in particular. There has been no other President in modern history who has focused so much racist attention on Mexico, after all. The worst part is they know it and don’t care, regardless of facts.

Republicans should know by now that they are seen as transparently racist when they don the Donald hats. Nevertheless, they will claim it’s not about racism, similar to their claims the Civil War was not about slavery but about “heritage.” Right…

As Julio Ricardo Varela put it:

“For most U.S. Latinos, when candidate Trump launched his presidential campaign in 2015 by calling Mexican migrants rapists, we knew that Trump was walking with those Americans who feared that the country was getting ‘too brown,’ too quickly for their personal comfort.”

Despite the glaringly obvious connotations of a MAGA hat in 2019, Bryton Turner decided he would wear it proudly inside a Massachusetts Mexican restaurant. While it might not be as blatant as wearing a white hood, one would suspect that it could insult people of Mexican heritage. Nevertheless, instead of considering that, this guy says his intelligence is insulted because Rosiane Santos, 41, approached him and swatted his MAGA hat right to his face.

Turner captured what happened on video, originally shared to Facebook but now taken down. Santos was allegedly intoxicated and walked over to Turner to express her disgust with his hat. Turner says the woman began “harassing” him verbally as soon as she spotted him walk into the restaurant. The outrage!

Now Turner is correct when he said:

“I can wear this hat wherever I want. This is America,” Turner said.

That doesn’t mean that he wasn’t fully aware it would insult people in the restaurant. While the Washington Post didn’t make that point, we sure as hell will because that is a critical point that common sense tells us is very likely.

Now this snowflake was so disturbed when the woman swatted his hat and pushed it over his eyes that he started filming the incident. Then any sympathy for him you may have had will probably disappear when you hear what he said next.

“See this right here? This is the problem,” Turner says in the video.

“Ignorant people like this. I’m just trying to sit here and eat a nice meal, and look at this.”

He films his face at Santos curses at him and pushes his hat down. Then Turner really lays it on thick:

“That’s the problem with our America these days. People are just ignorant. They want to lash out on people that are educated.”

Now before we move on, let’s point out the obvious flaw in that statement. Turner is using one of Trump’s signature moves — projection. In reality, who in their right mind would claim that Trump’s supporters are the ones who are more highly educated when he has unleashed a torrent of nonstop blatant lies and they still consider wearing his hat?

Let’s further note that the lies about Mexicans and immigrants are some of the most egregious and dangerous of all. Well, poor Turner. His intelligence was so very insulted that a person with brown skin would dare express outrage at a MAGA hat. He says he took the video “so she would stop.”

“I didn’t think it would blow up like this,” Turner told NBC.

Now consider that statement. He didn’t think that it would “blow up” like this. He didn’t think anyone would be so insulted they would express disgust and swat his hat. Of course, we can’t condone assault, but from the video evidence, it seems this woman didn’t harm much except Turner’s ego. How much more was her evening ruined by seeing someone who is supporting Trump proudly, a man who hurls weaponized demagoguery against Mexicans to this day?

Poor, poor Turner. Yet Turner is not the one who is trouble today. He watched as Rosiane Santos was confronted by police inside the restaurant. He showed zero sympathies for her then, and we doubt he cares one tiny bit that her entire life has been uprooted because she expressed her disgust for Trump.

“Rosie’s not doing too hot right now. I don’t know what happened,” he said innocently.

“She just tried to grab my hat in front of four officers. Not smart…there she is getting cuffed. Have a nice night in the cell, Rosie!” he quips.

So Turner gets to gloat as Santos, who he calls the familiar “Rosie” finds her world turned upside down. Why? She had the audacity to confront a Trump supporter in a Mexican restaurant.

Repeat: She had the audacity to confront a Trump supporter in a Mexican restaurant.

The Post reports that she may now face deportation, even though she is married to a United States citizen. She told police that Turner shouldn’t have been allowed in the restaurant wearing the hat that so offended her. They arrested her on misdemeanor charges of disorderly conduct and simple assault and battery and she was the one who had to leave. Now, she may have to leave the entire country.

Is there one Trump supporter who cares about her life?

Today, Rosiane Santos was detained by ICE and now faces deportation after an alleged confrontation with a man wearing a MAGA hat last week.

Tonight at 10, ONLY ON Boston 25 News, we hear from her husband about the entire ordeal. https://t.co/fuamzqyja7 pic.twitter.com/8yUyeCv8d8

On the way out, she swatted the MAGA hat again. Later she pleaded not guilty and paid a $40 bail. For reasons that are not clear, her name became a focus for ICE. Although the police didn’t know her immigration status, ICE soon detained her and entered her name into removal proceedings with the immigration court. Now Santos’ attorney says an immigration judge will determine if she will be deported or get her green card.

The bottom line is that the MAGA hat is factually seen as highly offensive by millions of Americans because of the racist demagoguery that Trump spouts to his base.

The worst part is most of them must be aware that it is offensive to wear that hat, the same as it is offensive to wave a Confederate Flag. What many Trump supporters won’t say aloud is that they hope it offends you, and because of their privilege as mostly white heterosexual Americans, they believe they should never suffer any consequences for their enabling or endorsing racism, hate, bigotry, and a stream of lies.

Now that right there might be the actual problem, Mr. Turner.

She now says “he’s not the victim.”

The truth is that they would have to truthfully acknowledge what that stupid red hat represents to understand the truth in her statement.

Considering all that has happened and how they still support Trump regardless of what he ever does, that sadly may never happen. Instead, Trump supporters are, of course, reveling in vindictive comments that Santos deserves any punishment she gets, however severe.

They’ll go on wearing those hats smugly as immigrants’ lives are permanently destroyed. Then they will blame them as they vote for people who will refuse to grant immigrants any path to citizenship and a better life.

See what happened to Rosiane Santos from ABC13 Houston below: