The United States Blues
Home News Immoral Trump says he leaned on God to help him get through... 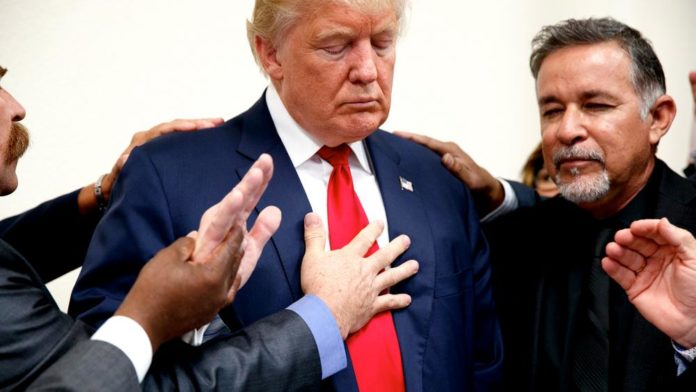 On Thursday at the National Day of Prayer service held at the White House, the most immoral man to ever hold the office of president said he had survived the Russia investigation conducted by Special Counsel Robert Mueller by turning to God.

Surprisingly, lightning did not flash from the sky when President Donald Trump made his declaration.

Speaking to attendees in the Rose Garden, Trump remarked:

“People say, ‘How do you get through that whole stuff? How do you go through those witch hunts and everything else?’”

At that point, Trump turned to Vice President Mike Pence and shrugged his shoulders before he added:

“We just do it, right? And we think about God.”

Trump also made sure to pat himself on the back:

“When I first started campaigning, people were not allowed or in some cases foolishly ashamed to be using on stores ‘Merry Christmas,’ ‘Happy Christmas,'” he said. “Take a look at your stores nowadays – it’s all Merry Christmas again.”

A few minutes later Pence joined the amen choir as he self-righteously commented:

“I can assure you, at a time when religious belief is often marginalized and even ridiculed, in this White House, under this President, we believe in prayer.”

Um, Mike…have you looked at the person you’ve now yoked yourself to? He’s not exactly the image of Christian rectitude.

Perhaps this commentary from Daily Kos best sums up the way the vast majority of us feel when we hear Trump talk about God, religion, or anything involving morality:

Trump thought of God? Only if God took the form of Colonel Sanders carrying a bucket of extra crispy.