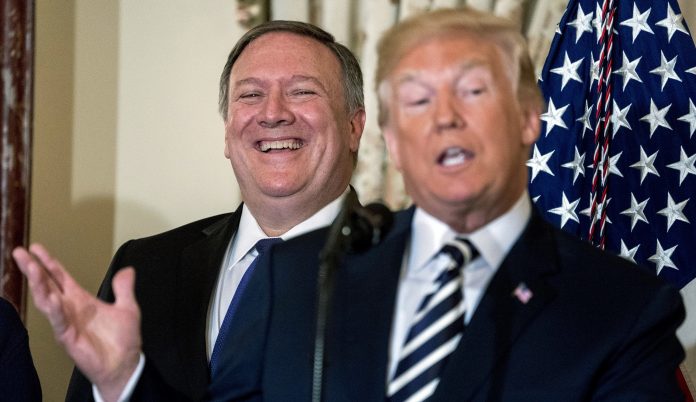 Secretary of State Mike Pompeo has long had a close relationship with President Donald Trump, and has been considered one of his closest advisers on issues related to foreign policy, intelligence, and national security.

But the ongoing impeachment inquiry has strained those once-close ties, according to The Hill, which reports that the testimony of employees from the Department of State to the House Intelligence Committee has created a rift between the two men:

Those tensions have led to questions about Pompeo’s standing with Trump and spurred speculation that he may use a long-talked-about Senate campaign in his home state of Kansas as an off-ramp from the administration.

“I think that this has all done serious damage to the relationship between president and Secretary Pompeo, for all the reasons you can imagine. I don’t know if it’s recoverable or not,” said a former State Department official, who requested anonymity to speak candidly.

Trump also reportedly said that Pompeo made a mistake when he hired Bill Taylor to serve as chargé d’affaires ad interim for Ukraine around the same time the president allegedly told the Ukrainians he would withhold military aid until they agreed to investigate former Vice President Joe Biden and his son, Hunter:

Trump … has expressed frustration with the State Department and its role in the impeachment proceedings, dismissing witnesses from the agency as “Never Trumpers.”

He has said little publicly about Pompeo’s involvement but issued tacit criticism of the secretary last month after William Taylor, the top U.S. diplomat in Ukraine, offered damaging closed-door testimony. Trump suggested Pompeo had made a “mistake” hiring Taylor.

One GOP source, however, told The Hill it was doubtful Trump and Pompeo would permanently impact the relationship between the two men:

“Internally, things go up and down all the time in there,” the GOP strategist said. “But I do think that Trump sees the value of Pompeo and vise versa.”

But if Pompeo is compelled to testify before the impeachment inquiry — which remains a possibility — all that could change.