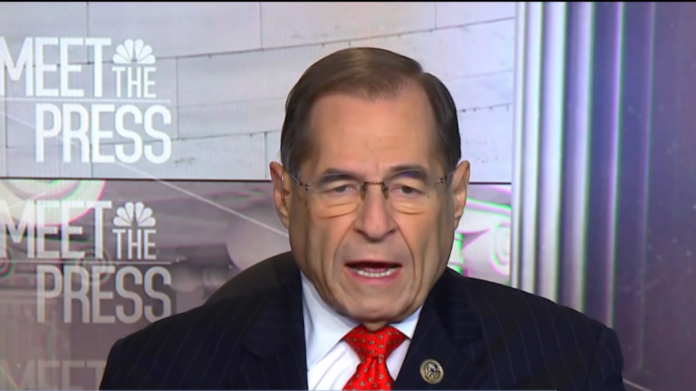 With the guilty plea this week from Michael Cohen, who served as an attorney for Donald Trump over the past decade, we learned more about how closely the current president has been tied to Russia and the Kremlin for years.

Rep. Jerrold Nadler (D-NY), the incoming chairman of the House Judiciary Committee, said Sunday on “Meet the Press” that it should now be clearRussia does indeed have some sort of control over Trump:

Nadler then went on to add that we have a much better idea why exactly Trump has been so deferential to and complimentary of Russian President Vladimir Putin:

“One question has always been why was the president so obsequious to Putin from the beginning of the campaign up to the present day? And it may be that it’s because the Kremlin has leverage over the president, which is a terrible thing if true.”

WATCH: Rep. Jerrold Nadler (D-N.Y.) tells Chuck Todd that obfuscation from the Trump campaign about doing business in Russia “gave the Kremlin a hold over him.” #MTP.@RepJerryNadler: “It may be that the Kremlin has leverage over the president” pic.twitter.com/sFOjmwhH9e

Cohen’s plea agreement with Special Counsel Robert Mueller was only one major development in the Russia probe, NBC News reports:

For his part, President Trump tried to downplay the Cohen plea deal, saying his former lawyer is lying so prosecutors will be lenient with him when it comes time for sentencing.

But the revelation by Cohen that he was making overtures to Russia in June 2016 in an attempt for Trump to build a high-rise tower in Moscow is in direct contradiction of the president’s repeated denials that he has ever had any business dealings with Russia, and may provide ample evidence for the special counsel that Trump has committed perjury.