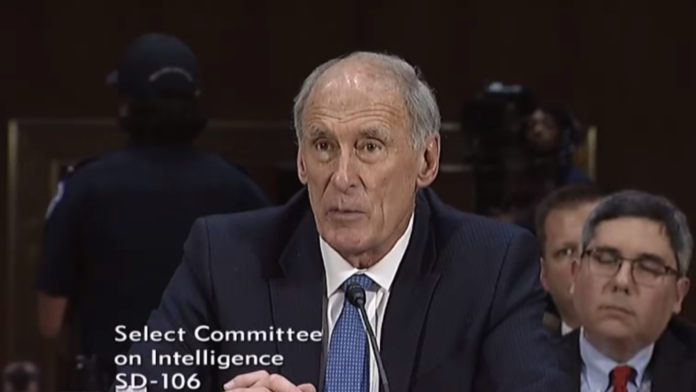 As the White House continues to dither on enforcing sanctions against Kremlin, the Director of National Intelligence warned Tuesday that the the United States is under attack by Russia and the 2018 midterm election is in grave danger.

“Our adversaries as well as the other maligned actors are using cyber and other instruments of power to shape societies and markets, international rules and institutions, and international hot spots to their advantage.”

Technological defenses, Coats added, are more important now than ever:

Russia, China, Iran, and North Korea pose the greatest threat to our national technological infrastructure, Coats warned, but he made a point of emphasizing the danger posed by Russia, which interfered in the 2016 election, possibly guaranteeing that Donald Trump was elected:

“[Russia is] likely to pursue even more aggressive cyberattacks with the intent of degrading our democratic values and weakening our alliances. [They] will continue against the United States and our European allies, using elections as opportunities to undermine democracy, sew discord and undermine our values.”

At the end of his opening statement, Coats again singled out Russia as the biggest threat to American democracy:

“Russia [will] continue using propaganda, social media, false flag personas, sympathetic spokesmen, and other means to influence to try to build on its wide range of operations and as bait social and political fissures in the United States.”

What has the Trump administration done about the dangers to our elections? Nothing. Even Attorney General Jeff Sessions has said he isn’t aware of any actions being taken to counter such meddling in American elections. And with the White House unwilling to enforce tough new sanctions passed overwhelmingly by Congress last year, the Kremlin has no fear there will be any consequences for their actions.