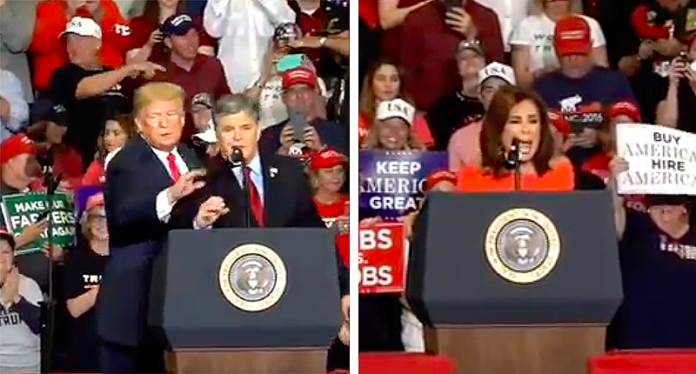 Monday night, on the eve of the 2018 midterm election, two Fox News hosts conclusively proved that the network is nothing more than the official propaganda wing of the Trump administration.

At an election eve rally in Missouri, Fox hosts Sean Hannity and Jeanine Pirro both appeared onstage to speak on behalf of the president. Hannity pointed to reporters in the back of the event hall and declared:

“All those people in the back are fake news.”

Hannity’s onstage comments were a direct contradiction of what he had tweeted out earlier in the day when the White House announced he would be at the event:

In spite of reports, I will be doing a live show from Cape Girardeau and interviewing President Trump before the rally. To be clear, I will not be on stage campaigning with the President. I am covering final rally for my show. Something I have done in every election in the past.

When her time at the microphone came, Pirro bellowed out this full-throated love letter to Trump:

“If you like the America that he is making now, you’ve got to make sure you get out there tomorrow if you haven’t voted yet, everyone you know…get them out there to vote for Donald Trump and all the people who are running for the Republican Party.”

Reaction to the two Fox hosts being a part of a campaign rally for the incumbent president was immediate and justifiably harsh:

Watching Hannity and Judge Jeanine gushing about the Trump rally (“it’s like a rock concert!”) — there is nothing to distinguish this from a paid political ad, nothing. Except it might have better production values.

When I was in 6th grade, we learned about state media as part of authoritarian states, like TASS in the USSR. Wow, never thought it would be this blatant. https://t.co/nTovDHlAou

Sean Hannity, making himself a liar and a joke pic.twitter.com/XaGRO8ajQD

So if you campaign with Trump – like Hannity did tonight – and then have Trump on your show, is that an in-kind contribution?

Can we officially declare Fox to be state media now? 🙃

Trying to imagine Hannity’s month-long meltdown if Obama ever invited Don Lemon on stage to have him insult other networks pic.twitter.com/dJy4hr2N9j