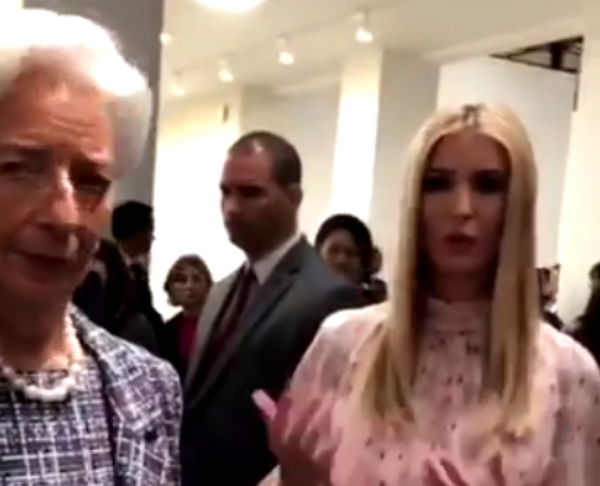 President Donald Trump’s grifter daughter Ivanka showed up at the G-20 this week, only to be snubbed by the leaders and diplomats in attendance who apparently didn’t think she belonged there either.

There to presumably cultivate more business interests to enrich herself and her family, Ivanka pretended to be an American leader at the high profile summit even though she has demonstrated that she has absolutely no power or influence whatsoever and is totally complicit with her daddy’s toxic and destructive agenda.

Ivanka pathetically tried to pretend to know what they were talking about, but in the end, only annoyed them and they ended up snubbing her.

Ivanka Trump appears to be trying to get involved in a talk among Macron, May, Trudeau and Lagarde (IMF head).
The video is released by French Presidential palace. pic.twitter.com/TJ0LULCzyQ

Only outgoing British Prime Minister Theresa May attempted to include her, but it’s pretty clear Ivanka was out of her depth.

In fact, it’s so embarrassing that Rep. Ted Lieu (D-Calif.) trolled her over it and sought an explanation, even asking why her husband Jared Kushner still has a security clearance.

I would like to hear Ivanka Trump’s explanation about this video.

Oh wait, Senior White House Advisor @IvankaTrump blocked me. Can you forward the below video to her and ask for her response? Thanks.

P.S. Can you also ask her why Jared Kushner still has a security clearance? https://t.co/qQ4xdrrpyl

Just as Kushner should never have been given a security clearance, Ivanka Trump should not be allowed to represent the United States in any capacity at home or overseas. She has zero diplomatic experience and is clearly only going on these trips to make business ties for herself. She doesn’t know anything about the topics being discussed and is as desperate for attention as her father. At least her dad has an excuse to be there since he’s president.