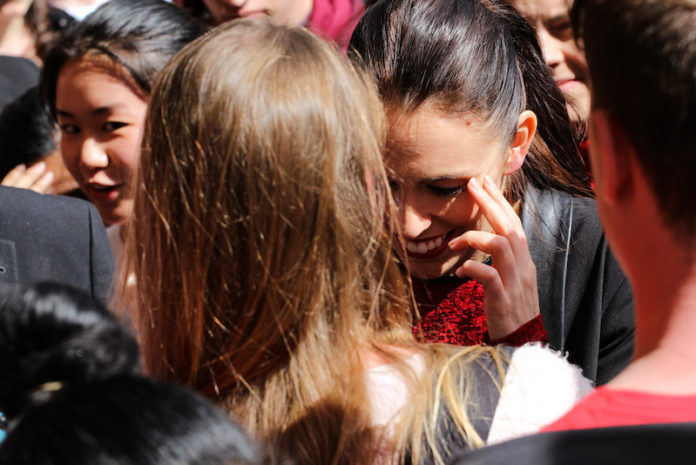 Jacindamania — as excitement around her has been termed — is multi-faceted, but according to Nation Builder, two strong factors were a resounding message and vibrant digital infrastructure:

“Not only did voters believe in her vision for the country, they believed what she had to say and trusted her authenticity.”

And in the aftermath of Christchurch, Ardern’s authenticity has been on display. Where many politicians might appear trite or kitschy wearing a hijab to comfort bereaved Muslims, Ardern accomplished the feat with confidence and humanity.

The Christchurch massacre claimed the lives of 49 people, and throughout her address to the victims of the massacre, Ardern still offered hope over division.

“[New Zealanders have] a responsibility to be the place that we wish to be. A place that is diverse, that is welcoming, that is kind and compassionate. Those values represent the very best of us. But even the ugliest of viruses can exist in places they are not welcome. Racism exists, but it is not welcome here.”

It’s a difficult question to ask whether people choose their leaders or leaders choose their people. It seems impossible to know whether Ardern’s sterling leadership in the face of tragedy is the product of the country that made her and chose her, or whether she helms the ship of New Zealand, guiding it towards a more prosperous and tolerant future.

In any case, she has seized the moment to exemplify leadership on a global scale, and demonstrate compassionate leadership to a world increasingly lacking in it.

To contrast, U.S. President Donald Trump rarely speaks publicly about mass shootings at all, even though America’s permissiveness of gun ownership allows them to occur with much more frequency. When the president does speak about these issues, it tends to be a confusing hodge-podge of reactionary policy prescriptions, police state apologia, and racial themes. On one rare occasion, he even name-checked NBA star Dwayne Wade, saying that Wade’s cousin’s death would push more black people to vote for Trump.

Dwyane Wade's cousin was just shot and killed walking her baby in Chicago. Just what I have been saying. African-Americans will VOTE TRUMP!

Despite his stated concern, the president has made no substantial moves to curb gun violence in America. Ardern, on the other hand, got right to work.

“Our gun laws will change,” she said at a news conference. The usual dynamic of Democratic incompetence and Republican nefariousness does not apply here — for Ardern, one massacre was more than enough to bump gun reform to a top-ticket item.

Currently, gun owners require a license to own firearms, but are not required to register them with the government. New Zealand’s laws are considerably more relaxed than Australia’s, and Ardern clearly intends to change that.

During her address, Ardern honed in on what she sees as the secret to a more tolerant world.

“The world has been stuck in a vicious cycle of extremism breeding extremism and it must end … We cannot confront these issues alone, none of us can … The answer lies in our humanity. But for now we will remember the tears of our nation and the new resolve we have formed.”

From Donald Trump’s “Muslim ban” in the U.S. to Muslims being identified as having a mental illness in China, Islamophobia is on the rise. What is remarkable about Ardern’s comments is that her solution — “our humanity” — is precise.

In the annals of history, what marginalized communities can suffer from is either deification or virulent hatred. Taking into account a spate of police brutality stories, one person’s inappropriate or criminal action, in the minds of many, grant police free rein to do what they will to ensure “justice.”

In these cultural tales, Native Americans were either naive tent-dwellers or bloodthirsty savages. African-Americans are either Morgan Freeman or criminals. Mexicans are “liars and rapists” and at their cringe-worthy best, cleaning toilets, Kelly Osbourne of The View put it.

Because these do not allow for a full picture of one life or many, Ardern’s prescription is instead to use humanity as a lens through which we see everything — politics, terror, and the grim, long road through the challenges we must face.

Through Christchurch, Ardern has been able to showcase for all of her citizens the New Zealand that she would like to see, and in turn, the New Zealand she can inspire them to believe in.

The road to combatting extremism, Islamophobia, and gun violence, even in a small nation like New Zealand, will undoubtedly be arduous. However, Ardern’s post-Christchurch performance, if anything, reveals that she will be ready for it.