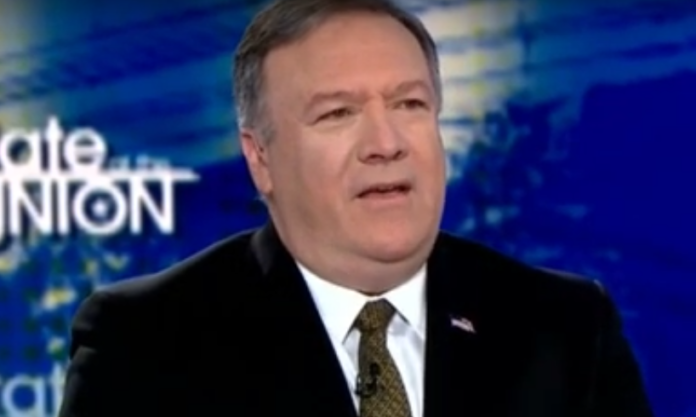 Secretary of State Mike Pompeo got caught telling a complete lie on Sunday during an interview with Jake Tapper after being asked about President Donald Trump’s claim that North Korea is not a nuclear threat.

North Korea is a nuclear threat to the United States and our allies. Even Trump’s own intelligence chiefs, including CIA Director Gina Haspel and Director of National Intelligence Dan Coats, agree with that assessment.

But Trump does not. In fact, Trump has repeatedly claimed that North Korea is no longer a nuclear threat because of him.

Pompeo began by accusing the Obama administration of being soft on North Korea. But Obama hit North Korea with punishing sanctions and would have met with Kim Jong Un himself had Republicans like Pompeo not whined about it and warned him against it at the time. All of a sudden, Pompeo and Republicans support Trump for doing what they screamed about Obama merely considering.

But then Tapper moved on and asked Pompeo about what Trump has said about the threat posed by North Korea.

“Does he still believe there’s no longer a nuclear threat from North Korea, even though Gina Haspel says North Korea is committed to creating a missile that could strike the United States?” he asked.

Pompeo evaded answering the question directly by criticizing past administrations and claimed that he understands that North Korea has made promises in the past only to break them.

“Yes,” Pompeo said, opening himself up to the original question again.

“But the president said he doesn’t,” Tapper responded.

“That’s not what he said,” Pompeo claimed.

“He tweeted there is no longer a nuclear threat from North Korea,” Tapper pointed out.

“What he said was the efforts made in Singapore, this commitment have substantially taken down the risk to the American people,” Pompeo insisted. “It’s the mission of the secretary of state and the president of the United States to keep American people secure. We’re aiming to achieve that.”

“That’s just a direct quote,” Tapper concluded before moving on to a new topic.

In fact, Trump directly declared that North Korea is “no longer a nuclear threat” in a Twitter post written shortly after arriving back in the United States after the Singapore summit.

Trump spiked the football at the time even though North Korea continued building their nuclear arsenal and got caught lying about missile sites.

Trump has been getting duped by Kim Jong Un for months, yet he continues to insist that progress is being made.

If Pompeo thinks that North Korea is a nuclear threat, he needs to make sure Trump treats Kim Jong Un as a serious threat instead of a buddy he can share secrets with and hand concessions to in complete disregard of reality. Our national security and the security of our allies in Asia is at stake. Pretending the problem no longer exists just because Trump wants a Nobel Peace prize will result in a catastrophe that could result in the deaths of millions of Americans. Not only will Trump be to blame, but Pompeo and other Republicans who stood by while Trump put his ego over national security will also be as well.