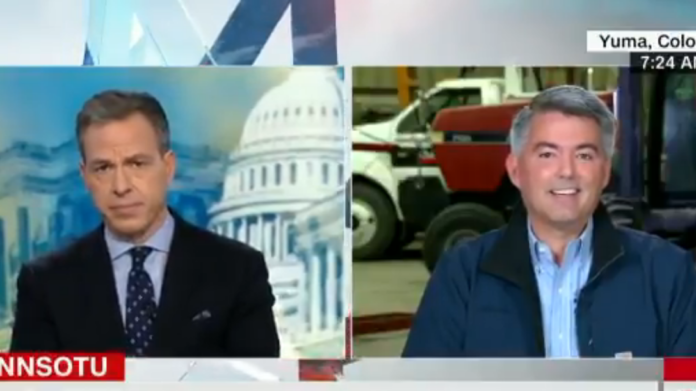 GOP Senator Cory Gardner (R-CO) got a harsh lesson in reality from CNN host Jake Tapper  Sunday when he tried to claim voter fraud has taken place in Florida, where the races for governor and U.S. Senate remain too close to call with a recount coming.

“Is there any specific evidence at all of any fraud, of trying to steal the election?”

“Well here is the specific evidence we have. We have a court in Florida that says we have a violation of the Florida constitution. We have a court that has demanded better behavior out of Palm County [sic] election supervisors.

“I think there’s clear evidence that the constitution was violated and a court in Florida has said the same.”

That’s when the CNN host laid a brutal fact check on the senator, telling him:

“Well, it’s true what you’re saying about transparency and about meeting deadlines, but Florida’s Department of Law Enforcement said Friday they haven’t even received any allegations of criminal activity, of fraud, of stealing.”

But Tapper was far from finished shutting down Gardener’s specious allegations of fraud, adding:

“And the secretary of state’s office just said yesterday that there is no evidence of criminal activity, so it just seems like the rhetoric we’re hearing –“

Before he could finish, Senator Gardner interrupted, again falling back on his earlier talking point:

As we saw in Florida circa 2000, the Republican Party is the party of voter suppression. They don’t want to count all of the votes cast if doing so might cause them to lose the election. It’s almost as if they realize they cannot possibly win without cheating. But their attempts to win by disenfranchising voters will only serve to alienate even more people.

Sen. Cory Gardner: “I think there’s clear evidence that the Constitution was violated and a court in Florida has said the same”

Tapper: “Florida’s department of law enforcement said Friday they haven’t even received any allegations of criminal activity, of fraud, of stealing” pic.twitter.com/2qaq72Xr2F