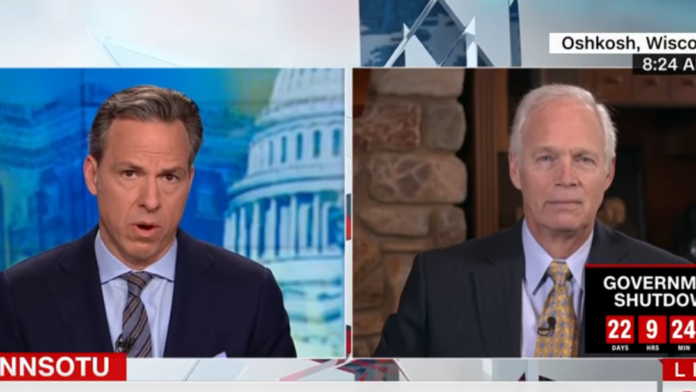 CNN host Jake Tapper used facts to shut down a Republican senator who insisted on spinning wild conspiracy theories about Democrats colluding with Russia during the 2016 election.

Senator Ron Johnson (R-WI) was asked about the New York Times report this week suggesting that President Donald Trump had been investigated by the FBI for possibly being a Russian agent. Johnson responded:

Johnson then began speaking in platitudes:

“The American people. We need the information on this so we can get past the innuendo and deal with facts because we have serious issues facing this nation and it’s not good we have this cloud hanging over any administration whether it’s this one or previous administrations or next administrations.”

But Tapper was ready for Johnson, countering by reminding him about irrefutable facts:

“We know for a fact that Paul Manafort provided campaign data to Konstantin Kilimnik who has ties to Russian military intelligence — so there’s that. In terms of the collusion between the Democrats and —”

Again, Johnson fell back on talking points, interrupting the host:

“We also know for a fact, we also know Democrats paid for the Steele dossier.”

Before he finished, Johnson went on an extended rant about corruption at the FBI, never responding to Tapper’s direct questions about what evidence he might have that Democrats had conspired with Russia the way the Trump camp did during the 2016 election.

No matter what Donald Trump does, it appears that most Republicans are only too happy to make excuses for him. It’s yet another reason the GOP is going to be implode when Trump is removed from office.